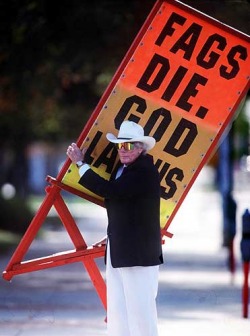 There are people in the world that I would say are a little off when in comes to religion.  There are a few I would say are disasters.  This guy is an absolute (if not insulted insert your favorite cuss word) abomination.  Fred is a "pastor" of a "baptist" church in Kansas called Westboro Baptist Church.  He claims to have a congregation of about 80, all as bat-sh*t crazy as he is, 70 of which also happen to members of his own family.  Let me tell ya a little thing or two about Fred and what he and his followers enjoy:

-They believe that America's tolerance of homosexuality has assured most of us a spot in the fiery pits of hell itself and that God was responsible for 911 for this reason.

-  Some of their favorite targets however have been funerals.  They have been known to scream at the members of mourning families to make sure they know that their loved one is now burning in hell.  Not only have they done this to homosexuals, but also service men.  Because apparently serving in the armed forces means that you are defending America, which supports gays, which in their minds means that you are going to hell.

Now, I know that homosexuality has been a hot topic in the church for a long time.  Is it right?  Is it wrong?  Well, I'm not a preacher and all I can tell you is my own opinion, so if you'd like to hear it, click here.
If you disagree with me that is certainly your right and the purpose of this site but all views aside, I hope that on some level we can all agree that no one deserves this kind of treatment.  God, by definition is love and that is the opposite of what this guy is preaching.  In fact I don't know who exactly he worships but I don't want to spend eternity with him.

If you've got the stomach for it, here's a clip of Fred himself, telling the world how much God hates...in this instance I believe Australia.  When I first saw this I honestly thought it was sketch comedy.  It's actually pretty hilarious until you realize he actually thinks like this:

It's time we make sure that everyone knows that this is not God.  That this is not even close.  For all we know, some of the people that see this moron and his followers have never been to a church and this is what he gives them to go on?  So what can we do?  Well I'm working on that.  Several bills have been passed in certain areas to keep him at bay from funerals, and I'd like to see even more passed, so that is something I'll keep you updated on.  Until then, I'm going to put up a blog and if you like, please leave a kind message for the families of people this guy has terrorized and for anyone who might come across this page.

Back to Speak Out