What’s the difference between Sunnis and Shiites? 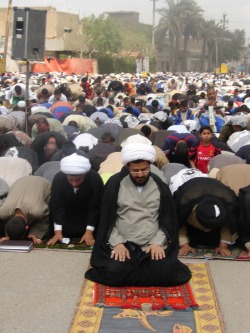 Both Sunni and Shia (Shi'ite) Muslims follow the basic foundations of the Islam faith and the articles of faith.  The difference actually began way back with the death of the Prophet Muhammad.  Upon his death, the question arose, who would be the new leader (or Caliph) of the Islam community?

Many people felt that it should go to the best man for the job as selected by the group.  This is indeed how it went and the Prophet’s long time friend as well as one of the first followers of Islam, Abu Bakr, was selected.  The word Sunni comes from a word that means “one who follows the traditions of the prophet.”  Most Muslims are belong to this group (anywhere from 70-85%).

However there were others who insisted that the role should stay within the Prophets family, kind of like a monarchy type set-up.  They believe that Muhammad’s son-in-law/cousin should have been elected the first Caliph.  Eventually he was elected to the position but only after 3 other Caliphs. Unfortunately, even then his position was disputed and he and his son where killed in battle with other Muslims.  To this day, Shia Muslims are known for being willing to die for Islam and reject the authority and teachings of the 3 Caliphs before Ali.   The word Shia comes from a word that describes a party (like a political one as we’d think of it here in the U.S.), and the name Shia is a shortened version of this groups original name “Shia-t-Ali” or Party of Ali.

Today the main differences in the groups are:

-believe that there should be no spiritual hierarchy in Islam and see Imams simply as leader of the Friday prayers.  They believe leaders have earned a place of leadership in the community and that the community can take it away.

-Give religious authority to their Imams (leaders).  These Imams lead not just congregations but the community and are believed to be both sinless and infallible.

There are however, two different groups of Shia Muslims called the twelvers and the Ishmali.

The twelvers believe that there were 12 Imams (all descendants of Muhammad) and that the 12th went into hiding but will return at the end of time to engage in an apocalyptic battle between good and evil.  He is sort of a Messiah type figure.

The Ishmali branch was formed back in 765, again over a disagreement of who the next leader should be.  Many believed the seventh Imam should be the sixth Imam's son Musa, while the Ishmali's voted for his son Ismali.  They still follow a line of Imams to this day.