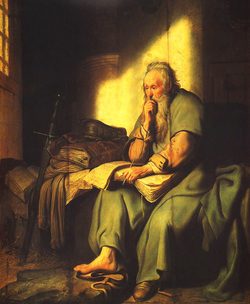 This is a tricky one which I want to present a couple of different interpretations of and you’ll soon see why.

Thoughts:
This translation by using the term “homosexual offenders” makes it seem like the verse isn’t referring to homosexuals in general. If you read the phrase “sexual offenders”, would you immediately apply the term to everybody on earth who had homosexual sex? Nah. Offenders seems to imply someone who was committing a sexual act that is inappropriate or deviant to society such as rape, child molestation, etc. Just as the term “sexually immoral” seems to apply to heterosexuals in the verse above so “homosexual offenders” seems to apply to those who are in some way using homosexual sex for evil. Just to make sure though, let’s look at another translation:

Thoughts:
It’s interesting to note that in this translation the term homosexual never actually comes up. Effeminate in modern society can mean everything from gay to a guy whose a little too friendly with polo shirts. And as far as “abusers of themselves with mankind” what does that actually mean? Let’s go back to the original text.

First of all what’s been translated here as “effeminate” is actually the word “malakee” which was used other times in the bible to refer to someone who was morally weak. It appears several other times in the Bible but was never used to refer to anything having to do with sexuality or even gender association. It wasn’t until 1946 that it was given any sort of sexual connotation when it was translated in the Revised Standard Version as meaning “sexual perverts”, which even then in no way suggests that the sexual acts where homosexual.

The second term “arsenokeeteh” is a strange word and weird choice for Paul to use here, it’s literal translation is “male active bed” which many scholars are a little up in the air on. Throughout history it’s been used to reference child molesters and people with infamous habits but rarely homosexuality. The larger point is that there were very clear words in the Greek language that meant “homosexuals” and the fact that Paul didn’t use any of them here suggests that that may not be what he was referring too. Some scholars argue that given Paul’s intense concern with temple prostitution it may have been a reference to a practice that was going on among idol worshipers at the time.