-7th Day Adventists to be exact.  One of their unique features is that they observe the Sabbath on Saturday rather than most churches who worship on Sunday.  They believe Saturday was the original 7th day of the Judeo-Christian calendar.

-  The founder of what would eventually become this denomination was a guy named William Miller.  Mr. Miller somehow came to the conclusion that he knew when the 2nd coming was going to occur and that was sometime between March 21 1843 to March 21 1844.  Needless to say, that didn't work out so well for him.

-  Unwilling to accept that Mr. Miller was totally off, some members of the congregation began to develop different interpretations of Oct. 22, 1844.  These included that that was the day that Jesus had entered a high sanctuary in Heaven (the most Holy place) and if you hadn't been saved by that date you had missed the boat.  Keep in mind at the time they were still fairly sure that Jesus was going to come back during their own lifetime.

-As it became more apparent that He wasn't, another hypothesis arose.  Perhaps it was that Jesus had entered this most holy sanctuary to begin a great judgment of everybody who professed to be a believer. This is known as "investigative judgment." Some also believe that after this great judgment's done, Christians will lose the ability to find forgiveness for their sins and therefore gotta be perfect from that point on. 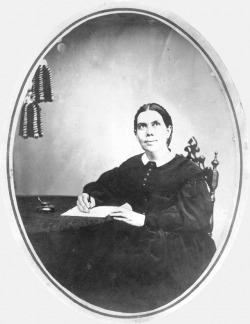 -  Enter a lady named Ellen G. White, wife of Reverend James S. White.  You might call Mrs. White a visionary...literally.  You see Mrs. White saw visions and lots of them, over 2,000 to be exact.  So busy was she having visions, that's probably even what's she's doin in the picture you see here. Most of Adventists (then still called Millerites) believed that she had been given the gift of Prophecy and her visions helped to shape the denomination and are still read today.

-  In 1863, the church decided on a shiny new name and where henceforth known as the 7th day Adventists.  They still put a large emphasis on Christ's 2nd coming and kept worshiping on Saturday.

-  They share many pretty standard evangelical beliefs such as the infallibility of scripture and the trinity.

-  Some of the beliefs more unique to themselves include the belief that when you die, you go into a deep sleep until judgment day, as opposed to the theory of going directly to heaven or hell.

-  They are also very big on health and recommend a vegetarian diet.  They also follow kosher laws presented in the Old Testament and avoid, alcohol, tobacco, and illegal drugs of any sort.  As much as it pains me to type it they also forbid...caffeine.

-  They are traditionally known to dress and act conservatively and are against tattoos, body piercings, (for some jewelry altogether), dancing, rock music, theater, or any other form of entertainment that is deemed to be a negative influence on spirituality.

-  They are also very involved in humanitarian efforts, education, and the protection of religious liberty.