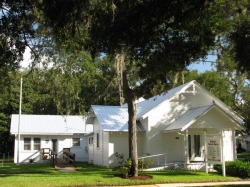 - Founded in America in the 1600's by Roger Williams, a colonist who set up one of the first settlements in the country established on the principle of complete religious freedom.

-  Baptists believe in "getting saved", which is a moment when you ask Jesus to enter your heart and become your Lord and Savior.  Non-Baptists often ask what exactly you are saved from after this point.  Some of the answers would include:  sin and hell.  Most Baptist believe that once you are saved, you cannot loose your Salvation.

-  The supreme authority is the Bible.  They have no creeds, ect, but look the the scriptures exclusively for their teachings.

-  The sermon is the main focus of the service rather than communion.  In many Baptist churches communion (called the Lord's supper) is only given on special occasions and is merely meant to be a remembrance of Christ's life and death rather than something that contains any power in itself.

-  Grape juice is often used rather than wine during the Lord's Supper/ Communion.

-  The leaders in the church are pastors rather than priests and they can be married.

-  Only those who have been saved and are true believers can be Baptized.  This can happen at any time in life from childhood to old age.

-  Baptism is by full immersion in water (as opposed to being sprinkled).

-  The Baptist church is a democracy meaning that each member has equal rights and privileges in determining the affairs of the church.

-  Official Membership in the church is restricted to members only, though anyone is welcome to attend.

-  Strong belief in individual conviction.  For example, while someone might feel convicted to fast for a week, that doesn't mean it should apply to everybody.  Everyone's walk with God is individual in this way.

-  Services are a little longer than say a Catholic mass.  The common length is about an hour or hour and a half.