The Great Gurus of Sikhism 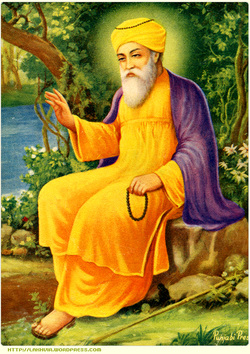 The first of the Gurus, he grew up in an area that was heavily populated by both Hindus and Muslims and spent a lot of time talking  to the holy men of
both.  One day when  he was bathing he disappeared under the water and was thought to have drowned,  but surfaced three days later to announce he had recieved a revelation from God that would be the foundations of Sikhism.  During the following years he traveled  throughout India as well as foreign lands spreading his message of equality  and speaking out against social injustice, tyranny, religious hypocrisy, and  empty rituals and superstitions.  When  he taught he would often use hymns, which were easily understood by the  people of the time, and 947 hymns in the Guru Granth Sahib are attributed to  him. 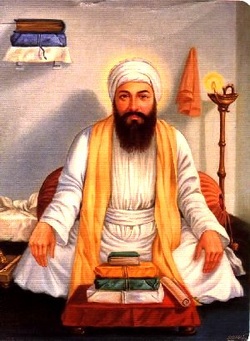 The first succesor of Guru Nanak, he compiled all of the first gurus hymns, continued to spread his message, and even wrote a biography on his teached called the Janam Sakhi.  He is also created with 63 of his own hymns in the Guru Granth Sahib. 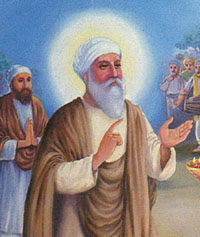 Guru Amar Das was a huge advocate for woman’s equality and in the course of his
teachings discouraged practices like forcing women to wear veils as well as an
old Hindu custom where a wife was burned along with her husband’s body upon his death.  He also worked to
spread the idea of the Langer, the free community kitchen among Sikhs and had
869 hymns attributed to him in the Guru Granth Sahib. 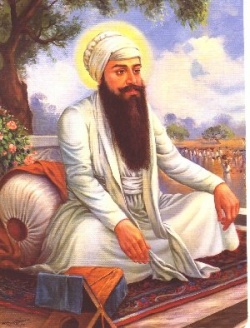 He stressed the importance of hymn singing in Sikh worship and is attributed with 638 hymns in the Guru Granth Sahib, among them the Anand Karaj, which is a standard part of Sikh marriage ceremonies.  He also helped spread Sikhism in North India and was very influential in helping shape the structure of Sikh society. 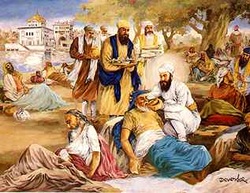 This master actually compiled the Guru Granth Sahib in 1604 and had an impressive 2312 hymns accredited to him.  He was the author of the Sukhmani Sahib bani or Prayer of Peace.  He both built the Golden Temple and started the practice of tithing in the Sikh religion, which is contributing 1/10th of one’s earnings
to charity or the community.  In the end however, he became the first of the Gurus to become a martyr, he was executed in 1606 by Emperor Jahangir for refusing to amend  the Adi Granth to reflect the Emperor’s laws. It’s said that he endured the pain of his execution by sitting calmly and chanting hymns. 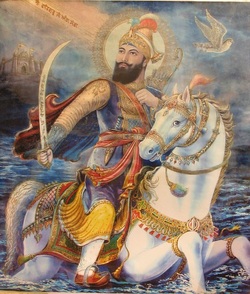 This guru played an important role in shaping the “soldier/saint” role into Sikhism by introducing weapons and martial arts.  Among the battles he fought where four against Mughal leaders who were
forcing people to become Muslims.
He would traditionally wear 2 swords- one that signified secular power and the other that signified spiritual power.

The grandson of Guru Hargobind, he also made his own son, Guru Harkrishan the eighth guru at the
age of 5.  Guru Har Rai continued the military traditions introduced into the religion by his grandfather and was said to have made Sikhism stronger and more popular. 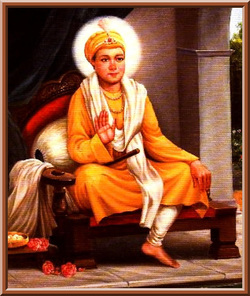 Known as the “boy guru”, he became the eight guru at the age of
only five.  He is said to have cured the sick of smallpox on a visit to Delhi but ironically died of it himself
at the age of eight.  However,
before he died, he nominated his granduncle as the next guru. 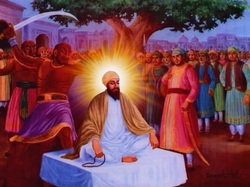 A champion of religious freedom, he actually gave his life for the cause.
He was able to protect a group of Hindus who were being persecuted by Mughals but was martyred by Emperor Aurangzeb for refusing to convert to Islam. 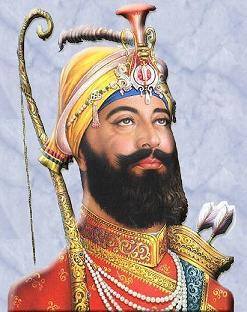 The tenth guru created the concept of the “Khalsa” (which means
pure), which consists of Sikhs who have been baptized and then dedicated their lives to upholding the beliefs and ideas of Sikhism.
Like the ninth guru, he was also a champion of religious freedom and
unfortunately lost four sons to the cause, who were martyred by the
Mughals.  He was also a writer and
composed his autobiography called the Bichitra Natak as well as several hymns which Sikhs recite daily. He also compiled the Dasam Granth Sahib. He instructed Sikh males to begin using the last name of Singh (lion) and females to take on the last name of Kaur, which means princess.  After his death he announced that his successor, the last and final guru would be the Guru Granth Sahib itself which was to be treated with all the respect of a living Guru. 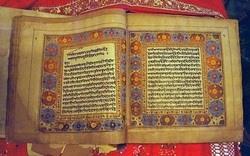 Back to Sikh Page