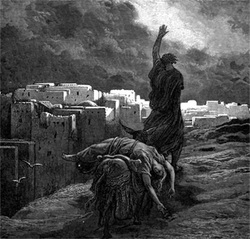 The Story:  The next example is a bizarre tale that all starts with a guy going to retrieve his concubine, a girl which he had married, from her father’s house because she had run away. When the guy arrived he and the girl’s father get along great, hang out a few days, then the husband and concubine turned wife decide to head home. Well along the way they stop at a city owned by the tribe of Benjamin and are taken in by a kindly old man coming home from the fields. However as the night draws on, a crowd of men appear at the house, much like the Sodom fiasco and demand that the old man send his visitor out so that, you guested it, they can treat him to a good old fashioned gang rape. However the old man refused and instead they send out the concubine who about this time is really wishing she had just stayed with her dad. Long and very sad story short, the crowd has their way with her to the point that they kill her. Upon finding his wife dead on the old man’s doorstep the next day, her husband cuts her into pieces and sends different parts of her to the different tribes of Israel.  To read it straight from the Bible click below: 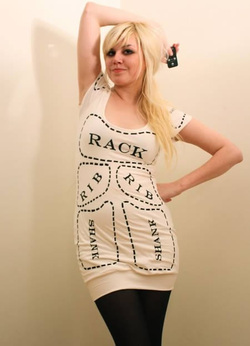 Um, anybody else starting to notice any creepy Old Testament patterns?

On behalf of ladies everywhere can I just get one more sigh? Why is it that when the gay gang rapers always show up, it’s us that they throw out like a piece of ham? Well unfortunately it worked. Proving here that the men were not even so much gay as just perverts. They probably could have thrown out a goat here and it would have done just fine. Again, this is an example of men who are proposing
1) to have sex with someone who wasn’t gay
2) without his consent
3) who they didn’t even know
4) In the presence of whoever happened to be out for a midnight stroll
5) Whether or not they were gay themselves, as can be argued by the fact that they mustered enough heterosexuality to rape a girl to death.
So, again, what we have here is a really horrible situation concerning people who I think all of us, gay or straight, would agree should be locked up for the good of society. So in my opinion, comparing gay couples today to those of “Sodom and Gammora” is about as fair as comparing this band of Old Testament rapers having sex with the concubine to a straight couple having unmarried sex.