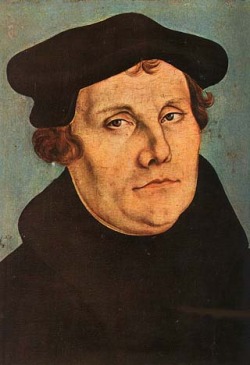 -Lutheranism was founded in the sixteenth century by this gentleman here, who is aptly named Luther, or Martin Luther to be more precise.

-Martin was a German Augustinian Monk who thought the Catholic church was getting a little shaky on adhering to it's principles, so he decided to do something about it.  So he wrote up a list of his complaints, including the fact that the church was at the time "selling" forgiveness in return for forgiveness.  Then on October 31, 1517, he marched right up to the doors of the Wittenberg Castle Church and posted his ideas for reform right there for the world...and priests to see.

-  The Pope wasn't too happy with Luther's ideas.  So not happy in fact that he excommunicated Luther (an official way of saying he kicked him out of the Catholic Church.)

-  Well as it turns out, not everyone was quite so quick to discount Martin as the Pope.  In fact it turned out he had quite a few followers, who broke with the Catholic Church themselves and began Protestantism (churches who aren't Catholic). 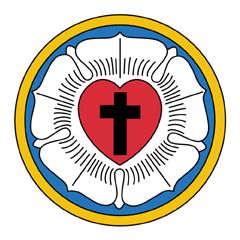 -  Here is Luther's official seal for his theology, which is often referred to as the Luther seal or Luther Rose.  For an explanation from Luther himself on what everything stands for, click here.

-  In 1530, the Holy Roman Emperor Charles V decided he wanted an explanation of exactly what the new craze was.  So he invited a bunch of German princes and leaders of free territories to what was called the Diet of Augsburg to explain themselves.

-  What they presented to Charles became known as the Augsburg Confession.  It forms the basis of exactly what it was that Luther had come up with and still serves as the basis for most Orthodox Lutheran churches today.  It has 21 articles about what Lutherans believe and 7 about where they thought the Roman Catholic church was off.  So without further ado...

*For clarification purposes, know this the following is my own translation of a much longer, much wordier text.  If you'd like to see it, click right....here.

Article 1- God- Lutherans believe God exists in the form of the Trinity and reject other interpretations of the nature of God.

Article 2- Original Sin- Lutherans believe that man is sinful by nature.  They believe that man initially has no fear of God or trust in Him.  The only cure for sin is to be reborn through Baptism and the Holy Spirit.

Article 3- The Son of God- Lutherans believe that Jesus was God incarnate.  He was fully human and fully divine.  He alone brings about the reconciliation of humans with God.

Article 4- Justification by Faith- man cannot be justified before God through our own works but we are instead reliant on Jesus for reconciliation with God.  (This is one of the main doctrines of the Lutheran church.

Article 5- The Office of Preaching- Lutherans believe that Christ established the holy ministry to see to it that His gospel was proclaimed throughout the world.

Article 6- Of the New Obedience- Lutherans believe that good works done by Christians are the result of faith and salvation, not a price tag for it.

Article 7- Of the Church- Lutherans believe that there is only one holy Christian Church and that it is defined as whatever churches preach the gospel in truth and purity and where the sacraments are upheld according to the gospel.  (It should be noted that the Lutheran church only observes the sacraments of Baptism and the Lord’s Supper rather than the longer list of Sacraments observed by the Roman Catholic Church).

Article 8- What the Church Is- Despite the hypocrisy that sometimes occurs in the church and by men, the Sacraments are always holy because they were instituted by Christ, no matter what the sins of the men who administer them.

Article 9- Of Baptism- Baptism is necessary for salvation and through it is offered God’s Grace.  Children are baptized as infants as an offering of them to God’s grace.

Article 10- The Lord’s Supper- Believe that Christ is actually present in the bread and wine of the sacrament and reject any other teachings.

Article 11- Of Confession- Private absolution should remain in the church, though a believer doesn’t need to list every single sin he’s committed because it’s impossible to name every sin for which he needs forgiveness.

Article 12- Of Repentance- Repentance comes in two parts:  Apology for sins committed according to the law and through the faith offered in the Gospel.  A believer can never fully be free from sin or live outside the Grace of God.

Article 13- Of the use of the Sacraments- Baptism and the Eucharist are physical manifestations of God’s Word and His commitment to his people.  They are never just physical elements or actions but have God’s promises bound to them.

Article 14- Of Ecclesiastical Order- Only those who are “rightly called” are allowed to administer the Sacraments.

Article 15- Of Ecclesiastical Usages- Lutherans believe that holidays and festivals are useful for religious celebration and observance but that they are not necessary for salvation.  Human traditions such as fasting, not eating certain meats, ect, as a means of gaining God’s favor are in opposition to the teachings of the Gospel.

Article 16- Of Civil Affairs- Governments are considered to be part of God’s natural order of things and Christians are free to serve in the government, military, and other vocations of the world.  All government laws are to be followed unless they cause a believer to sin.

Article 17- Of Christ’s Return to Judgment- Believe that Christ will return to judge the world some day and that the godly will receive everlasting joy while the ungodly will be condemned.  This article also rejects the idea that there will be an earthly kingdom for the godly or that Christ’s judgment will not be final.

Article 18- Of Free Will- Believe that we have free will in things subject to reason but that we do not have free will in spiritual righteousness.  Simply put we can make our own choices (to do good or bad) but if we want to achieve Salvation and do the complete will of God we cannot do that without the Holy Spirit.

Article 19- Of the Cause of Sin- God does not cause people to sin, it is the result of our own selfishness, ungodliness, and the devil.

Article 20- Of Good Works- Although Lutherans believe in salvation by faith alone, that notion doesn’t at all condemn good works.  If your faith is real, you will naturally do good works as a sign of that faith, but they are not necessary for salvation.

Article 21- Of the Worship of Saints- Lutherans do acknowledge saints but not as intercessors to God (as Catholics believe).  They are merely examples and inspirations for our own lives.

Article 22- Of Both Kinds in the Sacrament (Eucharist)- Sometimes in the Catholic Church, only the bread would be taken at communion.  Lutherans insist that both the bread and wine be offered.

Article 23- Of the Marriage of Priests- Lutheran clergy may marry for the same reasons that bishops of the early church could.  God blesses marriages as an order of creation and marriage and children are the natural outlets for human desire.

Article 24- Of the Mass- Lutherans believe Mass is a gathering that should be based on coming together to worship God and receiving the Eucharist.  They do not believe that is should be used as a form of ‘work’ for salvation or worldly gain.

Article 25- Of Confession- There is a need for confession and absolution but the point of Confession isn’t to cause guilt or anxiety for anybody.  Absolution is offered for all the sins the confessor has committed, not just the ones they can recall at the time.

Article 26- Of the Distinction of Meats- Traditions that say that fasting or special diet restrictions are a way to gain God’s favor are contrary to what the Bible teaches.  Fasting, ect. Can be useful spiritual exercises but shouldn’t be mistaken as a way to gain salvation.

Article 27- Of Monastic Vows- Man can’t achieve absolute purity whether as part of a community or alone.  Neither can he ever be perfected by any vow or by merely human actions.

Article 28- of Ecclesiastical Power- The only power that priests or bishops have is the power to preach, teach, and deliver the Sacraments.  If they are given powers by the government or military, then they are granted by them only.  They do not have a divine right to rule the military or the government.