"Do not think that my spiritual life is strewn with roses- that is the flower which I hardly ever find on my way.  Quite the contrary, I have more often as my companion “darkness.” 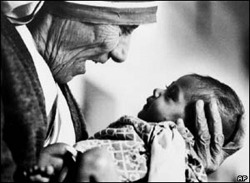 Birth
The woman now known to the world as Mother Teresa was actually born under the name Gonxha Bojaxhiu in Skopje, Macedonia in the year 1910.  So unconcerned was she about herself or chronicling her own life, that the actual date of her birth remains uncertain.  It is generally recorded as August 27, 1910 but she later admitted that that was actually the date she was Christened.  It is widely thought that the day of her birth into the church was much more important to her than her birth into the world, but many assume she was born on August 26.

Ministry
She claimed that she knew from the first time she took communion at age 5 1/2 that she had a passion for saving souls and acted out this passion throughout her 87 years on earth.  She began her life as a teacher and nun in Calcutta in 1931 but in 1946 she received a calling from God Himself to make an even larger contribution.  For a period of time Mother Teresa heard the voice of Jesus who called her to work in the streets on behalf of "the poorest of the poor."

In 1948 she received permission to set out on her own into the slums of Calcutta to care for the poor and dying.  With little more than a few volunteers and hardly any money at all, she relied solely on God and his grace to complete the vision she was called to.

In 1950 she established an order called "The Missionaries of Charity", an organization dedicated to caring for the unwanted.  In 1965 the organization became an international religious family and today has spread to countries all over the world. 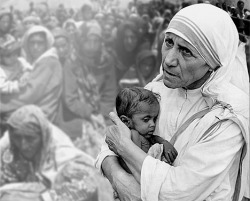 The "Darkness"
A fact that surprises many admirers of Mother Teresa is that it was later revealed in letters she had written before her death that she lived much of her life in a spiritual "darkness."  What she meant by this is that she often experienced a feeling of abandonment by God.  In a letter she wrote, "The darkness is so dark- and I am alone.- Unwanted, forsaken.- The loneliness of the heart that wants love is unbearable.-...My God- How painful is this unknown pain.  It pains without ceasing."  Though her faithfulness to God is one of the most celebrated in our modern time, Mother Teresa lived most of her life with this terrible darkness, and uncertainty.  "My God, what are you doing to one so small?"  she would sometimes ask, but no answer ever came.
However, rather than let this pain and loneliness convince her to turn from God, she would use it as an offering to Him.

"Jesus hear my prayer- if this pleases You- if my pain and suffering- My darkness and separation gives you a drop of consolation- my own Jesus, do with me as You wish, as long as You wish, without a single glance at my feelings and pain."

In the later years of her life, though the darkness always plagued her, she began to believe that it was not an abandonment from Jesus, but a connection to Him on the cross in His darkest hour.  She would pray to Him to allow her to share in His pain, if only it would ease Him of it just a little.  She later said "For the first time in this 11 years- I have come to love the darkness- for I believe now that it is a part of a very, very small part of Jesus' darkness and pain on earth."

*Some people ask whether this darkness or doubt made Mother Teresa any less of a Christian.  We dare to argue that it only made her a more incredible one.  Doubt is something that plagues every one of us, the only difference is the extent to which we are willing to admit it.  Mother Teresa proved that love of God is not always about emotion, which one of the biggest mistakes people can make when seeking a relationship with God.  We, and she, believe that faith is about love, even in the face of uncertainty.  God is love, love is truth, and the truth will set you free*

Her thoughts on evangelism
Mother Teresa is to this day an example of how beautiful Christianity can be at it's greatest.  Throughout her life, she found joy in helping the dying, the sick, the unwanted, and the forgotten.  However many people are startled to find that she did not attempt to "convert" or "evangelize" people in the traditional sense of the word. When asked about this she replied, "I am evangelizing by my works of love."  For Mother Teresa, showing people the love of God was a much more effective means of sharing her own love with God.  In the words of Saint Francis of Assisi "Preach the gospel all the time; if necessary, use words."

When asked in an interview for Time magazine about her thoughts on Hinduism, she replied:

Time: And they should love Jesus too?

Mother Teresa: Naturally, if they want peace, if they want joy, let them find Jesus. If people become better Hindus, better Moslems, better Buddhists by our acts of love, then there is something else growing there. They come closer and closer to God. When they come closer, they have to choose

Through her example Mother Teresa proved that you can love God very deeply, and still love others who don't relate to Him in the same way you do.  In fact, the best witness of your own love for Jesus is to treat others as if they were Him.  Rather than just telling people about Jesus, why aren't we striving to show them?

Death
Mother Teresa remains to this day a beacon of God's love and her life is still celebrated by the millions of other lives she was able to touch during her own.  One of the fathers of the missionaries of charity remembers her last days:

"If someone begged, "Mother, don't leave us.  We can't live without you."  She would simply say:  "Don't worry.  Mother can do much more for you when I am in Heaven."


Though she lived a brave live of suffering, she hoped to continue her ministry even after her death.  She once said


"If I ever become a saint- I will surely be one of "darkness."  I will continually be absent from Heaven- to light the light of those in darkness on earth."

On September 5, 1997 Mother Teresa was called home to be reunited with her one true love in Heaven.  On the night of her death there was a spontaneous power outage and all the lights went out in Calcutta. 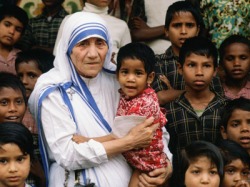