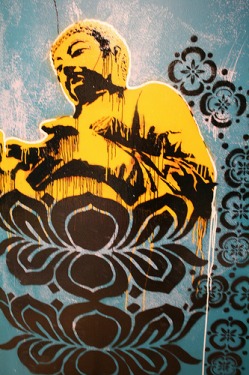 I finished the Buddha section study today after a couple of weeks of flipping tirelessly through books about it, trying to figure out what it all meant. The interesting thing I'm starting to realize is how similar most codes of morality are.  Basically at the end of the day they call come down to a few key things that are pretty much summarized in the Golden Rule.  Also I'm beginning to notice that in every belief system I can usually take at least something, whether or not I am totally into the whole thing.  For instance with Buddha, the things that bothered me where:

-  I don't like the concept that we don't have souls.  Maybe it was because I was raised to believe that a soul was as real as a liver or heart and it doesn't quite fit in my head to tell me now that I don't have one regardless, I'd like to keep my soul.

-  The concept of not existing as a self bothers me a bit because I feel that something so innate to the human experience is hard to seriously question.  Even my one year old niece has a concept that she is not the same things as her friend or her parents, but is in herself one individual little being.  It just seems to me that if we didn't exist as "selves", it'd be a little more obvious?

-  I don't fully accept the idea that they don't acknowledge a god because I think they do, just in a different form.  Even if all of life did spring from this vast creative energy called existence, even that in itself could sort of be considered a form of God.

-  The idea that we save ourselves rather than being saved is a noble one but to be honest I find it hard to give myself that much credit.  I think at the end of the day life is much to hard to do on your own and I like the idea that someone up there is looking out for me.

Things I liked:
-  the idea that all life is sacred is very beautiful to me and something I take much more seriously than some people.