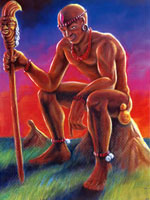 If you’ve got a message you’d like to get to the heavenly realm, this is the guy to talk too.  The messenger to the Orishas, God, and other spiritual beings, any time you offer a sacrifice be sure to cut him in or he might not be inclined to get your message where you want it to go.  Just a hint for smokers out there, among his favorites is tobacco.  Eshu lives at the crossroads of fortune so if a practitioner is also at a crossroads in their own life, it’s often Eshu that’s called upon for help.  Often associated with change, he can be a help for those perusing their destiny as long as they respect him, otherwise he might be inclined to throw them off course.

Eshu should be regarded with caution because he’s also very fond of tricks and practical jokes, especially the ones that add a little spice to life by throwing husbands and wives, friends, or sometimes whole towns into arguments.  This follows with the belief that chaos and disorder can’t exist without the other so Eshu often takes it upon himself to bring a little unpredictability to the table to keep things interesting.  Author Stephen Prothero describes him as “both policeman and troublemaker- whom Christians have often confused with the devil.” 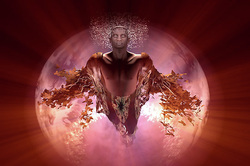 One of the most important Orishas, Orunmila stands for stability and harmony as opposed to Eshu who loves to spark chaos.  As legend has it, when once Eshu was threatening him, he laughed and told Eshu to go ahead and do what he would , because if he died then so would Eshu, because chaos cannot exist without order and the other way around.  Some consider the two along with Olodumare a sort of Yoruba trinity.  Said to be short, very dark, and the most intelligent of all the Orishas, Orunmila is omnipotent and can not only tell the future by also knows the destinies of all of humanity. 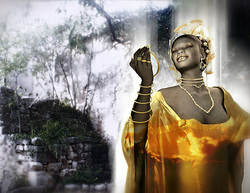 The goddess of rivers and the only female present at Creation, Oshun is considered extremely beautiful doused with jewelry and lovers.  She is the goddess of everything from fertility to sex and is said to control the sexual attraction of all creatures.  Though she is the Orisha often turned to for guidance and help during childbirth (as the entire abdominal area is sacred to her), she also relishes in the pure pleasure that can be found in the union of the male and female and for this reason is associated with honey.

However it is not only external beauty that’s associated with her but the deepest aspects of femininity that make women what they are and are often beyond words or physical description.

However she’s not all sugar and spice as her association with all things lovely might imply.  Legend has it that she’s not only a big fan of beer, knives, and poisons but that she can also be quite flippant in her own escapades of love.  She moves easily from lover to lover, dismissing men from her presence for the slightest annoyance and when she tires of the game entirely peaces out and turns herself into a river. 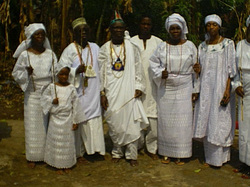 Rumored to be among the oldest and wisest of the Orishas, Obatala is associated with white and his followers regularly wear the color (as well as lead bangles) and strive to be as morally clean as Obatala’s gleaming white robe.  His enjoyment of the color can also be seen in his temples which are painted white and he is said to enjoy doves, rice, and coconuts, all of which have the color in common.  Obatala is said to be the owner of heads (where the Yoruba believe one of our souls is located) and therefore lays claim to everyone’s unless someone is officially inducted into the priesthood of another Orisha.

Palm wine is a touchy subject for Obatala and his followers are not allowed to touch the stuff as it proved quite diminishing for their patron Orisha.  As the story goes Obatala hit the palm wine bottle a little too hard when he was supposed to be creating the world and by the time he woke up from his drunken stupor, the once in a lifetime opportunity had been stolen from him by another Orisha named Oduduwa (rumored to be his younger brother).  Furious, Obatala swore off palm wine forever but as anyone who has sworn off anything forever knows, it doesn’t always work out that way.  It seems Obatala had a bit of a relapse as he was fashioning the bodies of people (though he didn’t technically give them breath), and it was during this escapade that he accidently invented dwarfs, hunchbacks, and other people with physical deformities who are to this day sacred to his followers. 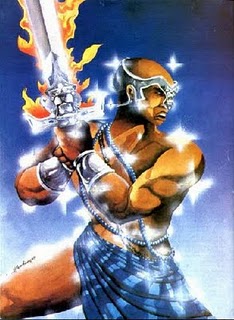 Ogun, much like Ares of Greek mythology is the fiery god of iron, war, politics, justice, hunting and these days even technology.  Said to be the first Orisha who ever came to earth, different stories claim that he either arrived to find sutible living conditions for humanity or hacked a trail through the great abyss that separated the Orishas from humans at the time.

Not unlike Obatala, Ogun too had quite a misfortune with palm wine when he found himself drunk on it as he engaged in battle in Nigeria long ago.  Apparently he became so enraptured with the battle that he found himself slaying not only enemies but friends as well.  Some say that when he realized what he’d done he turned his sword on himself and sank into the ground.  Others claim that he disappeared into the woods where he hunted and fashioned farmer’s ploughs but either way he’s a bit of a tragic figure.

However despite this mishap Ogun is also considered a fierce defender of justice and in traditional Yoruba courts, witnesses swear by kissing a iron rather then placing hand on the Bible.  Also very found of politics, many give him credit for the Haitian Revolution of 1804 as he is said to have planted the idea in the heads of Haitian slaves and helped them to attain their victory. 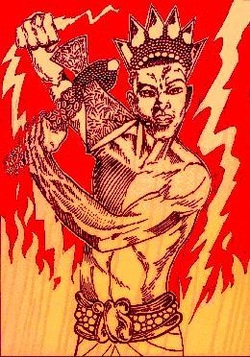 Said to be one of the most popular Orishas, Shango got his start as a mere mortal like you or I and was the third king of the Oyo empire during his lifetime.  In his death however he achieved Orisha status and lives in the sky wielding lightning bolts which he throws at those he chooses to be his followers.  This is said to leave behind the imprint of a stone ax blade on the earth and any Yoruba who knows how to look for them can easily spot these after a good rain.  Being chosen to be one of Shango’s followers is quite an honor as his people traditionally possess great power and self-control.  That said, he was also a major symbol of African resistance during the European slave trade.  He’s also quite popular due to his representation of male sexuality and virility in general. 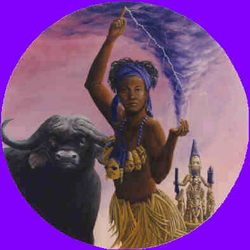 Said to be Shango’s favorite wife, she acquired from him the gift of lightning which comes in quite handy since one of her favorite pastimes includes creating storms such as hurricanes and tornados (which are said to be her whirling skirts).  Very fond of destruction of any sort, she is also the spirit of earthquakes, fire, magic, and change.  Due to her close associations with transition, she is also said to be the guardian of cemeteries and is known to have a very warrior like spirit.  She is also said to be the Orisha of the Niger river and can turn herself into a water buffalo. 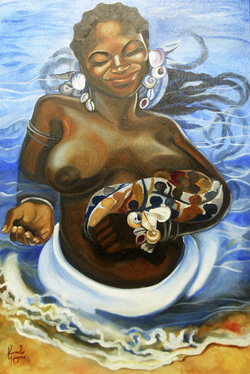 The patron of women (especially pregnant ones), the ocean, and motherhood in general, Yemoja was said to be the mother of about 15 different Orishas including Ogan and Shango.  Others go as far as to say that all life sprang forth from her but regardless she is very respected. 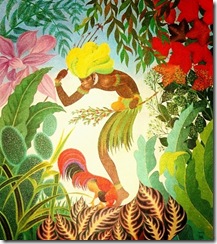 Osanyin is the Orisha of healing herbs and if you’ve ever gotten into natural medicane, it’s said that nothing you’ve made has worked without his help whether you know it or not.  Said to have a high pitched squeaky voice, he is often depicted with only one leg and in different traditions also either one eyed, one armed, or with one huge ear and one tiny one.

Back to Yoruba Religion