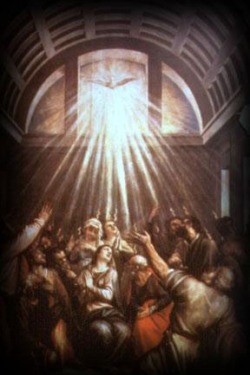 AKA- Church of God, Assembly of God, United Pentecostal Church, International Church of the Foursquare Gospel

Largely based on the following passage from Acts 2:1-4 :
1 When the day of Pentecost came, they were all together in one place. 2 Suddenly a sound like the blowing of a violent wind came from heaven and filled the whole house where they were sitting. 3 They saw what seemed to be tongues of fire that separated and came to rest on each of them. 4 All of them were filled with the Holy Spirit and began to speak in other tongues as the Spirit enabled them.

-  Many Pentecostals believe that evidence of being Baptized  with the Holy spirit comes in the form of speaking in tongues which is also called Glossolalia.

-  What exactly is speaking in tongues?  The answer can be several things.  The first time a believer usually speaks in tongues is taken by their fellow church members to mean that the Holy Spirit has descended on them as described above.  The person usually utters unintelligible language or noises.  Later this same type of experience is also taken to be a personal "prayer language" where the person speaking is communicating in an unknown language to God.  There is also the:

- gift of tongues where believers either speak in a language that they have not previously studied or in an unknown language, such as the language of angels.  Sometimes there is a a person with a gift known as the "interpretation of the gift of tongues" present who can tell what the person speaking is saying and share the message with the group.   Some Pentecostals believe the above two experiences are two different things, some think they are the same thing.

-  Pentecostals often pray out loud and their worship is many times very charismatic with the clapping and raising of hands, singing and dancing.  Many times public testimony is also encouraged.

-  Disapprove of public school students attending school functions (dances, school activities, ect) that go against their religious beliefs or being forced to wear revealing gym clothes in a coed environment.  They also disapprove of sex education being taught in any way that doesn't involve marriage.

-  Often point to 1 Cor. 11:13-15 as evidence that women shouldn't cut their hair.  Some sects of Pentecostal women very rarely trim their hair and wear it very long.

For more info on specific doctrines go to:  http://www.upci.org/doctrine.asp