What is Sharia Law? 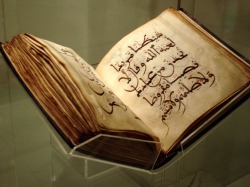 A lot of rumors tend to fly around in the west about Sharia law and exactly what it is and says.  We tend to associate it with a harsh set of laws with violent punishments such as cutting off someone’s hand for stealing a loaf of bread or stoning a woman to death for adultery.  First of all, let’s actually define it.

Sharia means “the well worn path”, and basically it’s the “path” Muslims follow to live their lives.  But today it’s usually used to refer to a formal determination in the schools of Islamic law of what is right and wrong.  These determinations are based on:

3)  The use of analogies of a given situation to an established law (for example if there is not a law forbidding drugs, it may still be concluded that they are wrong because there is one forbidding alcohol which has the same effect).

4)  The consensus of the Muslim world.

One important point is however is that even in the case of an Islamic state that was run entirely by this law system, Sharia is not meant to apply to Non-Muslims.  Christians, Jews, ect, are judged by their own laws and judges.  That said, let’s look at a couple of the most commonly asked about sins and their penalties.

If there’s any sin in Islam that seems to demand to be taken seriously its adultery.  Muslims go to great lengths to keep infidelity from becoming an issue, some more extreme than others of course.  In some countries they take every precaution from sending boys and girls to separate schools to only allowing Muslim women to go out with a male escort who is usually a member of her family.

As far as stoning to death for adultery, here’s what I’ve been able to find.  There is no mention of the death penalty in the Koran for adultery but it is expressly forbidden time and time again, although not totally unforgiveable.  In some Muslim traditions however it has been put up there with sins like murder and is punishable by stoning for both a man and woman.

However other sources I have found including one of the Muslims interviewed in John Bowker’s book “What Muslims Believe” indicate that its pretty hard to actually convict someone of the crime. He states that the crime “can really be established only by confession.  Otherwise you have to have four eyewitnesses- you know, four men seeing the act itself.  That’s why the penalty was not really very common in the Muslim world.”

The old “cut off the hand for stealing bread” law is one of the more commonly known penalties of the strictest interpretations of Sharia law.  So is it based on fact?  Kinda.  For the inside scoop I visited Sunnipath.com, an online Islamic academy.  You see in order for the penalty to actually be carried out, the situation must meet all the following conditions:

2.  The thief must must have reached puberty.

4.  The item stolen must have been safeguarded by either being guarded or locked up.

5.  The article is owned by someone else.

6.  There is no confusion that it was taken for the purpose of theft and no other reason.

Either the thief has to confess or two adult male witnesses must come forward and testify against him/her.  The punishment doesn’t apply to any articles that are useless or to food that goes bad quickly such as fruit, milk, ect, and it must be established that the thief was stealing the item and not getting rid of it because it was unlawful (like a musical instrument in places where they are forbidden for example.)  Also in Sharia law, the state is required to meet the needs of the individual, so someone stealing because they were hungry would be very hard to punish because the state is obviously not meeting his/her needs.

Generally speaking homosexuality is considered a sin in most Muslim countries, how bad a sin differs with the country.  A few interesting points I’ve found:

-  Whereas homosexual lust was forbidden in the Koran, a loving homosexual relationship was never mentioned.  This has messed with some Muslim scholars.

-  Homosexuality is considered a sin but no specific punishment is mentioned in the Koran, this being why it differs from country to country.  In some states there are no laws against it, in others it is illegal and is punishable with everything from flogging, to fines, to prison time, to death.

-  According to some Muslims sex by two unmarried people is a far worse sin that homosexuality.  I find this interesting especially in relation to America where often people freak out over homosexuality, but I personally have never heard of a law or street protest concerning premarital sex.