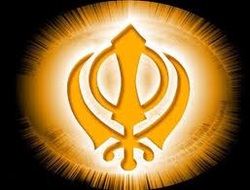 Sikhism first began in the Punjab in India in the 15th century and was established by a gentleman named Guru Nanak and his successors.  Sikhs believe there is only one God, who they call Waheguru, who is timeless, shapeless, omnipotent, and all-knowing.  As you may have guessed from the context clues, before the universe began there was only Him until He willed the rest of us and the world we live in into existence.  Actually I should also note that while I use the word “Him” to refer to God for simplicity's sake, He is actually believed to be sexless and Sikhs don't believe He's ever had any interest in taking on human form of any sort. Though Sikhs don’t believe human beings can ever fully know God in this life, they do believe that His glory is inherant in the world around us if we can only learn to look with our hearts instead of our eyes.

The teachings of Sikh don’t include concepts of Heaven or Hell but rather the process of reincarnation.  The idea is that we as humans are trapped in an endless cycle of birth, death, and rebirth and that the lives we are born into are determined by the karma we racked up in the last life.  The only way to break this endless chain is to achieve a union with God and the Truth, both of which lie beyond time and death.  One of the great Sikh gurus even stated that when a person truly connects to the truth and it starts to shine through them, they will understand the essence of all religious Holy books, past and present.

So how do Sikhs suggest you reach this great connection?  By a life path that includes following the teachings of the gurus, meditating on the name of God (a process called nām, which is considered one of the greatest things a human being can do), caring for others, and overcoming the five cardinal vices, which are discussed in the "beliefs and philosophy" section below.

How to Spot a Sikh 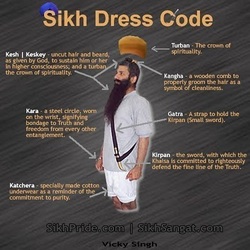 The community of men and women who have been baptized and initiated into Sikhism is called Kahlsa.  You'll know if you ever meet one by their distinctive dress code, which they refer to as the “Five Ks” which are:
-  Kesh- uncut hair
-  Kara-  a steel bracelet
-  Kanga- a wooden comb
-  Kaccha- cotten underwear
-  Kirpan-  wooden sword

The Three Duties that Sikhs Must Carry Out: 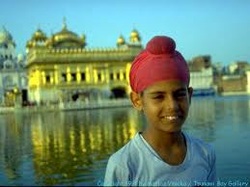 1)Nam japna:  which is keeping God in mind and in your heart at all times.

2)Kirt Karna: Earning an honest living.  Sikhs believe that hard work is the honorable way to support yourself and your family rather than shadier means such as begging or gambling.  They also avoid working in industries which may produce things that their religion doesn't condone such as alcohol or tobacco.

3)  Vand Chhakna:  Contributing to and caring for the community.  Caring for the well-being and rights of others are a huge focus for Sikhs in all aspects from performing charity work to defending human rights. 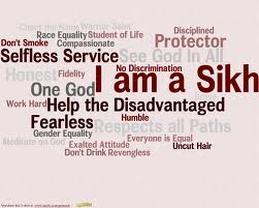 -  Sikhs believe that meditation is a great way to draw closer to God and their version of it consists of more than just clearing your mind.  Guru Nanak described it as "growing towards and into God".  Meditation is not only concentration on the name of God, but ideally a process where a person's inner self is revealed to Him.

-  The Five Cardinal Vices are Lust, Anger, Greed, Worldly attachment, and Pride.  “Maya”which means unreality is one of the other main things that separate people from God.

-  Sikhs reject any form of what they consider blind religious rituals such as fasting and pilgrimages as well as idolatry of any sort.

- Sikhs believe that everyone has direct access to God and that God exists inside all people, no matter how wicked they may appear.

- Sikhs believe that they must shift the focus off of themselves and onto God to achieve what they call mukti or liberation.  This is actually a gift from God and something he must do for humans rather than something they can earn.  However God does show us the best way to achieve this goal through his holy book as well as the teachings of the Gurus.

- Family life and community service are very important, and Sikhs often have free kitchens that are open to all people regardless of religion.

- Sikhs reject the ideas of prejudice based on race, sex, creed, or caste.  The last of these in fact can be taken literally as Sikhs spoke out against the "caste system" which is a part of the Hindu religion and has been inforced to various degrees over the centuries.  Sikhism denies the validity of such a system and expects it's followers to fight for the dignity and rights of all fellow creatures, especially human beings.

- An optimistic view of life is stressed.

-  When Sikhism first came about, some claimed that it was a reform version or combination of other religions such as Hinduism and Islam, however Sikhs strongly deny this.

- Giving up a "normal life" or a family in the name of God (for example becoming a monk or religious recluse) is highly discouraged.  Sikhs are expected to live out their beliefs as active and contributing members of society.

-  Sikhs are expected to live as soldier/saints and do believe in a sort of holy war called the Dharam Yudh.  To qualifty as such a war a conflict must the the absolute last resort after all other attempts at peace have failed, must not be motivated by revenge, and can't involve mercenaries.  The army in such a war must be disciplined soldiers who use the minimal amount of force possible and who are careful not to harm any innocent civilians.  Additionally there must be no looting or claiming of territory.


- Some of the things forbidden to Sikhs include:
o  intoxication
o adultery (spouses must remain physically and
mentally faithful)
o premarital sex
o sacrificing creatures or eating the meat of a creature that’s been sacrificed in a ritual manner.
o  Obsession with wealth or material possessions
o  Living as a recluse, yogi, monk, etc.  Sikhs are encouraged to live in families where they take on the role of soldier/saints.
o  Bragging, gossip, slander, or other unproductive talk
o  Sikhs also do not have a priest or hierarchy, the Guru Granth Sahib is the only authority and any Sikh is free to obtain, read, and care for one.
o  Abortion, Suicide, and Euthanasia are generally looked down upon as interfering with God’s gift of life.  Sikhs have no objection to contraception however and in the case of euthanasia, there may be exceptions depending on the reason.

The teachings and philosophies of Sikh were believed to be handed down to humanity by God through ten Gurus, or spiritual
teachers/saints.  The first of these Gurus was Guru Nanak who was born in 1469 and the last was Guru Gobind Singh who died in 1708.  However the last Guru left the Sikh religion with a very interesting heir.  The Sikh Holy Book is a collection of scripture called Guru Granth Sahib and it is considered the last and final Guru itself as well as the head of the Sikh religion.  Just like the other Gurus, the Guru Granth Sahib is not considered a divinity itself but is treated with the same respect a living leader of a religion (the Pope for example) would be.  The text of the Guru Granth Sahib contains a lot of hymns, many credited to the gurus, poetry, and lessons on how to both live life and achieve salvation.

For a more detailed look at each of the gurus click below: 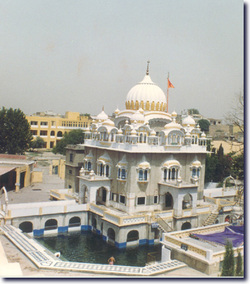 Places where Sikhs gather to worship are called Gurdwaras and
there are thousands of them both in Punjab and around the world. These Gurdwaras are places where Sikhs gather to read scripture and sing
hymns from the Guru Granth Sahib and they can also serve as a sort of community center.  They sometimes contain libraries for scriptures or schools to teach children and very often contain a
Langer, which is a kitchen where anyone is welcome.
A Langer is a way to symbolize a great world community where everyone is welcome and equal regardless of sex, creed, race, or religion.

The Golden Temple of Amritsar 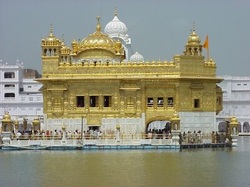 The temple, named Harmandir Sahib and often referred to as the Golden
Temple, is one of the holiest places in Sikhism.  Built in the city of Amritsar,
Punjab in India, construction of the temple began in 1574 and was supervised by the fourth and fifth Sikh Gurus. Though it has been destroyed several times by Sikh enemies, it has been always been rebuilt to be just as glorious as it's always been.  An architectural wonder, the temple is visited by both Sikhs and visitors alike.

Click Here to Check Out More Sikh Ceremonies and Festivals