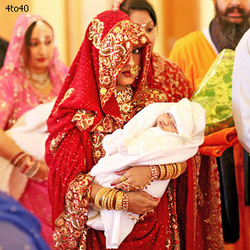 The naming ceremony of a new little guy or girl , which is called Nam Karan, happens when the mom and baby are able to travel to the Gurdwara.  There they gather with the rest of the family and sing happy Sikh hymns and celebrate the new little addition to their family.  Then when it’s time for the naming ceremony, they turn to a random page in the Guru Granth Sahib where they look at the first letter of the first hymn.  That in turn becomes the first letter of the baby’s name.

Sikhs believe that death is a natural part of life and that the dead body was merely a shell for the soul which lives on.  Therefore loud crying or excessive mourning is discouraged at funerals, which usually take place in the form of a cremation ceremony after the body has been washed and prepared by the family.  As the body is cremated a prayer called the Kirtan Sohila is prayed and when the ashes are ready they are put in the nearest river. During the mourning period, a reading of the entire Guru Granth Sahib is preformed either in the home of the dead person or in a Gurdwara.   The reading is timed however to last ten days, and when it’s finished on the tenth day the mourning period is said to end. 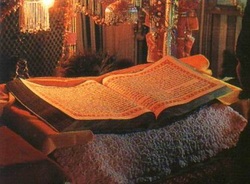 This is a 48 hour cover to cover reading of the Guru Granth Sahib either by a family or by a professional reader in the presence of the family or group.  It either happens in joyous times such as the birth of a child, a marriage, or moving into a new home, or in hard times such as the death of a friend or loss of a job. Sikhs are very specific however that it’s not to be performed as a blind ceremony, a concept that Gurus forbad. 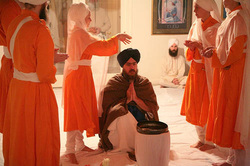 Baptism, as in many other religions, is a very sacred event and is to only be undertaken by those who are ready to be fully initiated into the Khalsa
brotherhood.  Anyone may join the
Khalsa, regardless or race, sex, or previous religion, as long as they fully
understand the commitment and are ready to undertake a lifelong journey as a
member of the Sikh religion.  The baptism is performed in a place where the Guru Granth Sahib has been installed and the person to be baptized prepares by washing their hair, covering their head, wearing clean clothes and the five K’s before presenting themselves to 6 other Sikhs who have already been baptized.

5 of these Sikhs conduct the ceremony while the other reads from the Guru Granth Sahib.  The beliefs and philosophies of Sikhism are explained to the person being baptized, a prayer called the Ardas is said and then the Guru Granth Sahib is opened to a random page and the hymn on it is sung.  A sweet sugar water called Amrit, which the initiate will be baptized with, is prepared by the 5 Sikhs involved in the ceremony.  One pours in clean water and adds crystalized sugar and the others hold onto the edge of the bowl sturring the water with a double edged sword and saying ceremonial prayers.  When the mixture and prayers are done, one of the 5 offers the prayer of Ardas again.

The initiate then receives the amrit in his or her cupped hands,
drinks it, then exclaims “Waheguru Ji Ka Khalsa, Waheguru Ji Ki Fateh.” (The Pure Belong to God, Victory to God).   After that, Amrit is
sprinkled on the initiates hair and eyes , and then any Amrit that is left over is drunk by everybody participating.  The rules and codes of the Khalsa are reviewed, another prayer follows, and then sacred pudding is eaten from a common bowl.  As the ceremony concludes, the initiate is given a Sikh name if they don’t have one already. 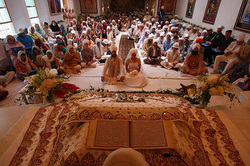 The Sikh wedding or Anand Karaj (union of souls) can be performed in any
Gurdwara or home where the Guru Granth Sahib has been installed.
The ceremony can be performed by any respected Sikh and it can take place
between a boy and girl of any caste or race, as long as both profess to believe
in the Sikh religion alone.  Dowries of any sort are strictly forbid, as Sikhs don’t want marriage to become any sort of transaction.

After a few more prayers and hymns, a hukam or a random verse is read from the Guru Granth Sahib and the husband and wife are united as one soul. 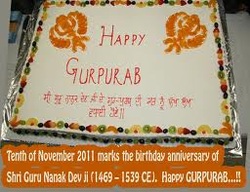 A gurpurb is the celebration of important anniversaries of dates associated with the lives of the gurus.
Some common ones include:
-  The day the Guru Granth Sahib was installed in the Golden Temple by Guru Arjan Dev.
- The birth of Guru Nanak
- The birth of the Guru Gobind Singh
- The martyrdom days of Gurus Argan Dev and Tegh Bahadur, as well
as the martyrdom day of the sons of Guru Gobind Singh. 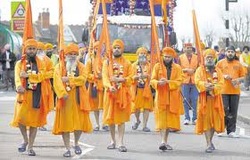 Celebrated around April 13, this is considered to be a sort of birthday
for the Khalsa brotherhood.  Because of it’s importance, many people chose to be baptized into the Khalsa on this day. It’s also celebrated by fairs, parades, and visits to the Gurdwara. 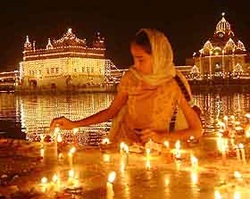 This is a celebration of the day Guru Hargobind was released from imprisonment in 1619.  On that long
ago day, Sikhs welcomed the Guru home by decorating the Golden Temple with many lights, a welcome that is reenacted there to this day.

This day celebrates the martyrdom of a group of warriors known as the “forty immortals”.  Initially members of Guru Gobind Singh’s army who had deserted him, the men returned and fought bravely against an overwhelming Mughal army.  In the process they gave up their lives, however the Guru declared that they had all attained Mukti
(liberation). 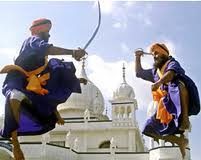 This festival was started by Guru Gobind Singh as a display of mock military battles, a tradition that is carried on to this day.
It also includes horsemanship displays, swordsmanship, religious lectures, and even a parade.

Back To Sikh Page