Who are the Sufi? 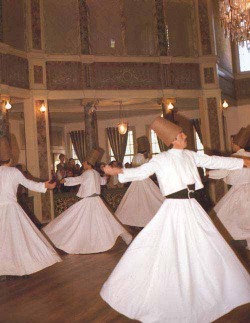 The Sufi are an off-shoot of Islam that take a more mystical than legal approach to God.  The Sufi say "why wait" when it comes to meeting God and tend to seek a more immediate experience of him rather than wait until they get to the afterlife.  For them, it's more about experience than law and they tend to be sort of "eastern" in their beliefs that everything is one and there is no difference between the Creator and the Created.  The goal for them is to get rid of the ideas of "self" so that we can form a union with God.
That said, they generally tend to feel that all religions are a path to the same God, but are very specific that God and religion should never be mistaken for the same thing.
Some divide the Sufi into two groups, the sober and the drunken (yes really hehe).  The sober are more rational and approach God with the traditional awe. While the drunken are more prone to emotions and looking at God as an expression of ecstasy and love.  One of the most famous drunken Sufi is the poet Rumi.