The Evolution of “Religious Daoism” 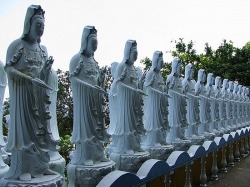 In the days of Lao Tzu and Zhuangzi, Daoism was one of those religions that could be thought of more as a “philosophy” in that it didn’t really concern itself with the concept of a God in the sense of a diety or the question of death.  However unlike many religions that have more or less been the same since their beginning, Daoism glorifies in change and therefore began to incorporate the idea of deities as it grew.

Though they started as opposites, over the years Daoism began to incorporate some of the tenants of Confucianism and today in China the religions exist more as brothers than rivals.  The two along with Buddhism, which Daoists began to borrow ideas and meditation techniques from, form a sort of trinity of religions and it’s not uncommon among Easterners to be practitioners of all three.

By the start of the first millennium, Daoist heros like Lao Tzu where slowly starting to develop into gods and what some refer to today as “religious Daoism” was born.  Some Daoists prefer to stick to only the principals we discussed on the first page however, as they believe that it’s Daoism in it’s purest form.  Many refer to this sort of traditional way of thought as “Philosophical Daoism”.

As religious Daoism grew, an interesting development occurred in the way of the subject of death.  Though Daoism had to that point not much concerned itself with the topic, the advent of religious Daoism saw the rise of an interest to escape it, not through spiritual means but by physical immortality.  Legends of immortals began to form, some of the more famous being The Eight Immortals, which I will introduce you to if you click on their name below.

Immortals lived either high in mountains or in far away hidden lands.  Not only where they immune to death but also to aging, enjoying youthful bodies that were not affected by cold, fire, moisture, or any other pesky element.  Not only that however, these immortals also had cool superpowers such as that of flight, shape shifting, and swords of invisibility.

So of course, once the concept of these immortals was out there, a variety of people set out to achieve the notion themselves, attempting to become masters of controlling their “chi” or life energy.  All sorts of techniques developed, some involving physical techniques such as breath control or avoiding orgasms at the height of sex (the idea that it was an intense release of chi which could be absorbed back into your own body).  Others were more focused on alchemy as scholars tested out different potions in hopes of a magic elixir that would produce immortality.  Unfortunately many of the magic potions turned out the produce quite the opposite effect and resulted in deaths, even those of some emperors.

Eventually the quest turned more to “inner alchemy”, the idea of purifying the body’s natural flows and energies to produce a long, happy, and healthy life. 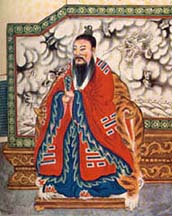 Around 142AD a hermit by the name of Zhang Daoling was hanging out up in the mountains, surrounded by nature like any self respecting Daoist of the time.  One day in the midst of his studies, who should appear to him but Lao Tzu himself.  Only now it became apparent that Lord Lao was not only a scholar but in fact divine and the incarnation of the Dao itself.  Lord Lao explained all this to Zhang Daoling and gave him instructions in morality, meditation techniques, and even bestowed upon him the ability to heal.  Additionally Lord Lao arrived with some good news and some bad news.  The bad news was that the world was going to end.  The good news was that it would be followed by an era of great peace and that all those who followed him would go on to another life (sound familiar?).  As part of the covenant Lord Lao made with Zhang Daoling, all the followers of this new order would have access to the celestial powers that control mankind and fate.

Zhang Daoling dutifully wrote his own set of scriptures and started a new sect of Daoism known today as the Way of the Orthodox Unity.  He of course was it’s first leader and went by the title of “Celestial Master”, which some have referred to as a sort of Daoist Pope, a position which exists to this day.

Legend has it that Zhang Daoling never died but ascended to heaven to become an immortal.  He is today referred to as the “Ancestral Celestial Master" and regarded as one of the first to institutionalize Daoism as a relgion.

Click here to referance gods and Immortals of Relgious Daoism

It was a hot day in the summer of 1159 that found soldier/Daoist Wang Chongyang cooling off with a few beers (or the ancient Chinese equivalent) in a tavern at the ripe age of 48.  Apparently on that particular day a couple of immortals had the same idea and  met up to discuss some secret Daoist thoughts with Wang Chongyang over drinks.

This encounter, as well as another a year later where one of the immortals provided Wang Chongyang with a set of written instructions, would be the start of another great sect of Daoism.  At this point, Wang Chongyang took on a couple projects that would put even the craziest antics of Ezekiel to shame.  He started out by digging himself a grave, but then went the extra mile by living in it for three years.  After which he filled it with dirt, and built a hut that he called the “Complete Perfection Hut”.  It was there that he studied and imparted his wisdom for the next four years before burning it down and going out to further establish what would become known as the “Complete Perfection Sect” of Daoism.  He took on 7 disciples, 6 men and 1 lady, who would later become known as the 7 immortals.

Part of Wang Chongyang’s teachings where the idea of a return to the essentials of Daoism, as he rejected the use of magic and alchemy in the quest for immortality which he considered foolish altogether.  Inner alchemy he claimed, was the true way to spiritual immortality rather than the quest for magic potions to prevent death.  His was a path of simplicity and his teachings where among those that helped put Daoism in sync with Chan Buddhism and Neo-Confucianism.