Again, I want to start this page by saying I know that homosexuality has been a very confusing topic for many Christians throughout history.  Our theology recognizes it as a sin and I absolutely understand that some people feel that it's not something they can morally support.  However, what I want to make clear here is that I'm not concerned about homosexuality in the moral sense on this page, I am concerned for the lives of people who happen to be homosexuals.
The way I see it, even if it is a sin, I myself have been known to be quite the sinner.  And even if my sins aren't the same as theirs, they don't make me any better than them and I'd certainly hate for them to be punished as harshly as this bill suggests this particular sin should be. 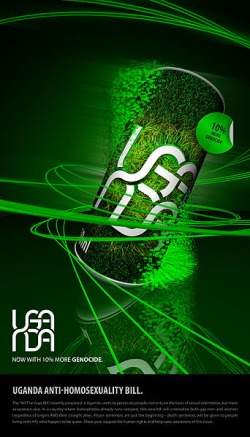 The whole thing began last October in Uganda (in Africa) when a bill was proposed that if passed, would introduce the death penalty for homosexuals who either had a previous homosexual conviction (it's already illegal and punishable by up to 14 years in prison), are HIV positive, or who have gay sex with anybody under 18.
The origins of the idea are thought to have stemmed from a Christian conference that was held in the Capitol of Uganda and involved American evangelicals: Scott Lively (who wrote several anti-homosexuality books), Caleb Lee Brundidge (a former gay man who claims to be able to heal homosexuality) and Don Schmierer (a board member of Exodus International which promotes "freedom from homosexuality through the power of Jesus Christ.")
During the conference these guys outlined homosexuals as a danger to the traditional African family and compared homosexuality to bestiality and child abuse.  However, when news of the bill came out, even they were a bit in shock at it's severity.
Don Schmierer later told the New York Times that while he did outline how gays could change to heterosexuals, he never suspected such a reaction.  He called the bill "horrible...absolutely horrible." He went on to say,  "Some of the nicest people I've ever met are gay people."
Meanwhile Scott Lively followed up in his blog that he was "overjoyed with the results of our efforts and predicted confidently that the coming weeks would see significant improvement in the moral climate of the nation, and a massive increase in pro-family activism in every social sphere. [Conference organiser Stephen Langa] said that a respected observer of society in Kampala had told him that our campaign was like a nuclear bomb against the 'gay' agenda in Uganda. I pray that this, and the predictions, are true."
But even Lively came out against the bill saying "I agree with the general goal but this law is far too harsh... Society should actively discourage all sex outside of marriage and that includes homosexuality ... The family is under threat... [Gay people] should not be parading around the streets."
Also in the limelight with this particular bill was "The Purpose Driven Life" pastor Rick Warren when it came out that his friend and associate Martin Ssempa (a Ugandan pastor) had endorsed the bill.  After a period of silence where Rick didn't really speak out for or against the bill, he did eventually announce his opposition, calling it "un-Christian".
The bill is currently still on the table and will be discussed in either February or March.

How you can Help

If you want to speak out against the Anti Homosexuality Bill, you can sign a petition at:
The Petition Site
IPetition

Back to Fail Blog