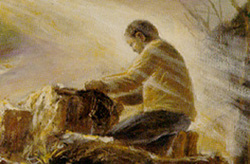 Members of the Unification Church and it’s institution “The Family Federation for world peace” believe that God’s perfect plan for love is achieved through the trinity and “Ideal family” of a man, a woman, and God.  Members believe that Eve, the first woman, kinda screwed things up when she (they believe) had sex with the devil and then with Adam spreading around original sin like a bad std.  Jesus showed up a few centuries later to fix the problem but unfortunately was crucified before he could complete the plan.

Followers believe however that Jesus appeared on Easter morning in 1935 to a young Korean man named Sun Myung Moon and asked him to finish His mission on earth.  Moon, who had grown up in Japanese occupied North Korea had been seeking to bridge the gap between the cruel reality of the world and the peaceful existence offered by religion.  Moon chose to accept the mission and spent years pouring over the religions of the world as well as in prayer, at times claiming to be lead directly by Abraham, Moses, Jesus, Budda, Mohammad and other world religious saints and leaders.  Though he does not claim to be a deity, his followers do believe Moon to be the Messiah in his second coming.  The teachings that would become the foundation of the Unification church are known as the “Divine Principals” and combine Biblical and Eastern knowledge to describe the nature of sin and God’s perfect plan for family. 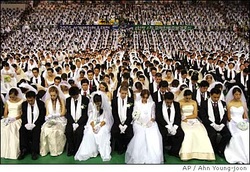 Followers refer to Reverand Moon as the first “True Father” and his wife as the “True Mother.”  They believe that the first glimpse a person has at how much God loves them is in the relationship between a parent and child.  The love this child feels is then extended back to the parents, towards brothers and sisters, and is finally given to someone from another family when they grow up and take a husband or wife.  At this point God’s love is made complete through the formation of the now grown up child’s new “True Family” where the process of love will begin all over again with God at the center of the family.  It’s believed within the church that if the world was full of true families, many of it’s problems such as abortion, unwanted pregnancy, abusive relationships, and even AIDS and other sexually transmitted diseases would disappear.  Moon also teaches that the human sexual organs are to be highly respected and that homosexuality and free love should be done away with.

Followers often take part in mass wedding ceremonies performed by Moon, usually marrying a partner selected by the church.  Many of these couples are international or interracial to symbolize that humanity is one big family and it’s believed within the church that these couples’ children will be born without original sin.  This also reflects Moon’s belief that the problems of the world will be solved by the leaders of the world’s religions working together rather than purely by politics or government.