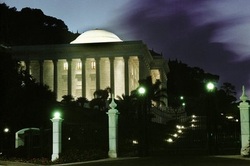 The Baha’i have no set clergy or rituals but have two governing bodies.  The first is the Universal House of Justice in Haifa, Israel which is a global governing body and is all male.

Each Baha'i community also elects its own members of a Spiritual assembly who oversee the regional affairs of the community and can be either male or female.

Baha'i houses of worship can differ as far as architectural design, but the style on the left is common, the different angles of the roof symbolizing the diversity as well as unity of the human race.  A basic service might consist of singing, meditation, and readings from both the Baha'i faith as well from the different religions around the world.

March 21:  Spring Equonox and beginning of the Baha'i Calender.

May 23: Bab's declaration of his mission

May 29: The day Baha'u'llah passed away

July 9: Martyrdom of the Bab

October 20: Birthday of  the Bab

November 12: Birthday of the Baha'u'llah 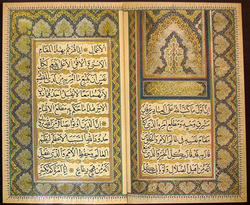 In a way it could be said that the Baha'i have many Holy books since they recognize the validity of all religions and therefore regard their scriptures as holy.  As far as original writings, there is a book called the Kitáb-i-Aqdas which means "Most Holy Book" which as you may have guessed, they hold in very high regard.  Written by Baha'u'llah himself, the Kitab-i-Aqdas deals with everything from laws for individuals to government to mystic writing regarding the soul and God.  The writings of the Bab as well as of Abdu'l-Baha' are held in very high regard as well.