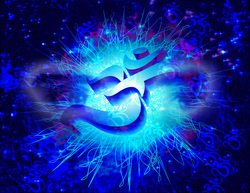 The more I began to read about Hinduism, the more I knew that this would be one of the more challenging religions to put into words due to the fact that it seems to be incredibly open to other religions and beliefs.  Hinduism, the oldest of the world’s great religions, as well as the 3rd largest in the world with 15% of the earth’s population being followers, is also one of the most accepting, more likely to incorporate any belief it happens to find beautiful rather than reject it in the name of doctrine.  In fact Ghandi, one of the most well known Hindus of recent history, was very fond of the Sermon on the Mount and often incorporated it into his regular readings.  Belief is not really a central concern of Hinduism which tends to be based more on following established practices more so than beliefs.

A playground for the senses, Hinduism is a religion full of artwork, incense, candles, dancing, and epic adventure.  It’s gods are blue skinned, elephant headed, tricksters, lovers, and fierce warriors and their followers are incredibly diverse as far as which gods they relate to personally with home alters, paintings, and in temples.  Exactly how many gods are there?  The answer is perhaps one of the most misunderstood aspects of Hinduism.

One God or Many? 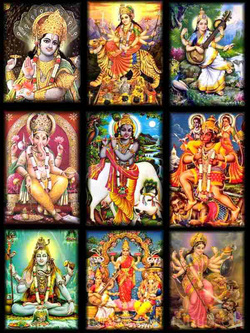 A common joke about Hinduism is that it’s the only religion in the world where the number of gods outweighs the number of followers.  With over 300 million estimated gods, it can be easy for Westerners to write off Hindus as idol worshipers, or at least polytheists but many Hindus beg to differ.  As it turns out, although there are indeed millions of individual gods, many Hindus believe that they are not individual deities but merely different aspects of one infinite God who is so incredibly vast and powerful that it would be impossible to confine Him to one image.  Therefore all the different statues of gods with lots of arms or guys who are part animal are in fact merely unique aspects of one Almighty God or Supreme Being.  The most obvious Western analogy for me is that of the Christian trinity; a Father, Son, and Holy Spirit who although separate are in fact different parts of the same being.

As Christians collectively refer to the trinity as “God”, you might hear Hindus call Him “Brahman”, the name they give to an all powerful all encompassing reality or being.

Many Hindus are also monotheistic in the fact that they do choose a specific god to worship which is called an “ishtadevata” or chosen deity.  Others may choose to worship a couple such as Vishnu and Lakshmi or may only choose a certain god to honor at festivals but not in daily life.

The number of images and gods to choose from makes it much easier to relate to God in a way that appeals to followers on an individual level.  Rather than just one God who you can either relate to or not, in Hinduism you are almost guaranteed to find a way to relate to god that appeals to your unique personality, beliefs, or even style.

Though this might sound strange to those used to a black and white image of God as described in a certain holy book, the God of Hindu thought can be thought of as a father or mother with many children.  Any one with kids knows that it’s very rare to ever relate to any two children in exactly the same way, as they all have different personalities, likes and dislikes, even problems.  Likewise the God of Hindus relates to millions of different followers in millions of different ways.

Among all these gods there does in however exist a trinity of three principal gods who are Brahma (the creator), Vishnu (the preserver), and Shiva (the destroyer).  Many lesser gods are in fact avatars or incarnations of these gods as they appeared in different forms.  The main difference between them and the God of the Abrahamic faiths is that Hindu gods seem much more “human” as far as their attributes and personalities are concerned.  Hindus do not expect or need their deities to be perfect and many gods are said to enjoy booze, war, and especially sex as demonstrated by Shiva who was rumored to have once had sex with his wife for 1,000 straight years.

Likewise these gods do not concern themselves with the sins of their followers.  If you choose to sin that’s your business and you will indeed pay for it but not at their hands.  You see Hindus also believe in a principal called Karma.

Have you ever spat out a piece of gum on the sidewalk only to step in a piece left by someone else the next week?  This in it’s most basic form is what Hindus mean by “karma”, a “what goes around comes around” philosophy that holds people responsible for their actions not through the judgment of a deity but by a force that assures that you will get back what you put out into the world.  This of course also works for good deeds and the more positive energy you put into the world, the more you will receive in turn.  Hindus see life sort of like a movie where the bad guys are always defeated in the end and the hero, even in the face of hardship, always has forces come to his aid that lead to a final victory.  A big part of determining your Karma can be determined by Dharma.

Dharma has several interpretations and can be used to mean anything from “religion” to “the state of the world as it should be” but regardless it refers to performing your sacred duty.  Hindus believe that everyone has a place in the world and along with it come certain duties that must be preformed.  Dharma is different for everyone and in fact the Bhagavad Gita emphasizes that it’s better to die performing your own dharma that to perform that of someone else.  Individual dharma is determined by age, gender, and for many Hindus “Caste”. 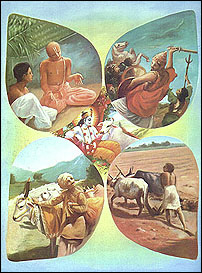 Hindus are born into a social order called the “caste system” which tends to remind me personally of the high school “clique” system insisted on by many American teenagers.  Whereas in your average high school you are likely to find jocks, nerds, skaters, band kids, ect, in Hindu society there are distinct castes but unfortunately for some a lot more than popularity depends on which one you belong to.

The RigVeda describes the different castes as different parts of a body as follows:

Brahmins- The priests and highest on the caste scale.  They make up the head of the body.

Kshatriyas (Rajanyas)-  Warriors and Kings, who make up the arms.

Vaishyas-  Farmers and Traders, they make up the thighs

Shudras-  Severants who make up the feet

There is also another caste for those outside the caste system which is thought to have at first evolved to signify either the lowest people of the Shudra caste or criminals, foreigners, ect.  Often called the “untouchables”, these poor guys are akin to the nerdiest nerds in high school, unfortunately these days through no fault of their own since somewhere down the line this caste became hereditary like all the others.  They call themselves “Dalits” meaning “oppressed” because they are not only excluded from many Hindu rituals but are in many cases also regarded as untouchable, as their shadows falling on a holy man in the old days could have been enough to make him “unclean”.  Obviously in the modern world this is a lot harder to adhere to especially in cities where everybody shares subway cars, buses, ect.

Although the Hindu sacred scriptures do support the caste system they never make the distinction that one caste is necessarily “better” than the others, sort of like Confucius’ theory of society where everyone plays a certain role but are all theoretically equal parts of a whole.  In fact in the 1950’s the Indian government outlawed class discrimination and in some largest cities the system has gotten very blurred or phased out all together.  However in rural India, where 72% of the population lives it is still alive and well.

Although caste is not the sole factor as far as social status (education, finances, ect are taken into account as well) it can determine things such as occupation and marriage.  Often Brahmins (who are considered pure) work as scholars and cooks, since food cannot be accepted from the lower classes by the higher ones.  Vegetarianism is often mistakenly associated with Hinduism as a whole while in reality it is mostly only practiced by the higher castes of some areas.  Lower caste citizens might work as barbers, maids, or janitors since they handle bodily substances that may be thought of as unclean.

Since class is inherited from parents, marriages are arranged carefully to preserve it and mixed-caste children are not considered members of either caste.  Traditionally marriage was preformed totally without the consent of the bride and groom and arranged completely by the parents.  This still goes on to some extent today but usually pictures are at least exchanged first.  More modern families however tend to shoot for a consensual arranged marriage by introducing boys and girls of the proper caste and seeing who they hit it off with. 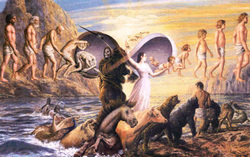 So with all this talk about Dharma and Karma why is it that sometimes crappy people get rich and good people have bad luck?  Well according to Hinduism what happens in this life isn’t necessarily the final outcome.  You see Hindus believe in reincarnation, the concept that when you die your soul leaves your body and rather than go to Heaven or hell, is reborn in a new body.  Exactly what kind of a body is up to you via your karma.  If you were an awesome person in your past life, generous, caring, compassionate, and all that good stuff the theory goes that you will be reborn in an even better body and set of conditions than you were last time, sort of like moving up to the next grade in school.  However if you were a say a corrupt businessman, you will be “held back” in school terms and might be born a poor guy in a third world country.  And you better be a damn good poor guy unless you want your luck to be even worse the next time around.  This whole process is referred to as Samsara.  Wanna know what it is?  Kindly turn the page and I'll tell ya.