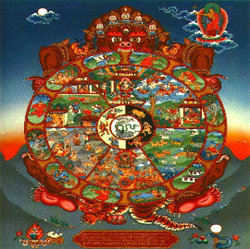 Samsara is the process of birth and rebirth of a person’s atman which is their “self” or “soul”.  The Hindu concept of the soul is unique in that many believe that it is inseparable from or in some cases one with Brahman or God.  One of the best ways I’ve heard to illustrate this is the story of a young boy who was asking his dad about who and what exactly he was in relation to God.  The father took the boy and sat a glass of water next to a pile of salt.  He told the boy to mix the two together and then waited until the salt dissolved into the water.  He asked the boy to now separate the two and when the son replied that this was impossible he replied to the boy “you are that”.  According to Hindu belief every person and thing is infused with and on a level one with God and realizing and experiencing this is part of the path to what is known as Moksha. 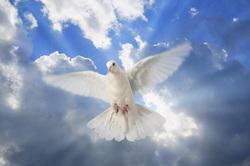 If Samsara is the cycle of death and rebirth that the soul goes through in it’s journey through lifetimes then Moksha is the escape from this cycle.  Much like a student who has gone through all levels of his schooling, Moksha is for the follower that has reached a state where they have escaped enough illusion and ignorance to shed the body and earth completely.  Exactly what Moksha is can be different for individual Hindus but regardless can be seen as a supreme a goal for them as Heaven is for Christians.  Some believe in fact that much like Heaven, Moksha is an individual place while others believe it to be the merging of the atman or soul with divinity or with a follower’s personal god.  Moksha is believed to be such an important goal in the destiny of a soul that to most Hindus it is one of the four purposes of life along with dharma (duty), artha (wealth/power), and kama (sensual pleasure). 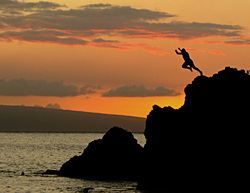 So if Hinduism sounds like the religion for you, where do you sign up?  The answer is as fantastic as it is unusual for us Western minds; you kind of make it up as you go along.  You see while most Hindus hold to the above tenants, the religion itself has no dogma, no central authority, nobody to tell you what you have to believe or can’t.  Although, as with almost every ideology known to man, there are small sects of fundamentalists who believe that their way is the only way, for the most part Hinduism is one of the most open-minded religions in the world.  As author Diane Morgan puts it, “There is no creed to recite, only paths to follow.  The choice of those paths is completely up to the seeker.  In Hinduism, the road to freedom begins with freedom.” However if you are interested in the faith, you should be up on the lingo as very few followers actually refer to their religion as Hinduism.  You are more likely to hear “darshana” which means seeing or experience, or perhaps “Sanatana Dharma” which can be translated as meaning the eternal way of truth. 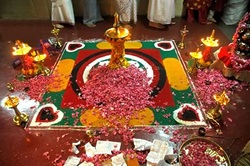 Hinduism, like many other religions consists of followers actively seeking a relationship with their chosen god.  There are several popular forms of worship or “puja” which means paying respects.  One of the more popular is making offerings to the gods in the form of candies or flowers in temples, offerings which then the gods give back to other followers as "Prasad" or favors for them to take home and enjoy.

Another form is “arti”, where a lamp or candle is lit by the follower as a gift of light to the god.  Again a give and take ritual, the follower then puts their own hands over the flame and brings them up to warm their eyes.

The practice of "darshana" is also interactive as the follower gazes at the image of a god or goddess who then in turn is thought to look back and see them as well.

Prayer, mantras, and songs are also popular as well and can be done in temples or in the devotees home where an image of their chosen god is often kept.  Some devotees like to care for these images, bathing, clothing, and presenting food sacrifices to them.  This can be incredibly demanding especially if the devotee worships a god who appeared in the form of a child such as Krisha the young cowherd.  These images (usually statues) are treated like actual children and require just as much care.

The modern era makes it easy for Hindus to keep up with worship even on busy days with websites such as www.spiritualpuja.com where you can jump online and offer a puja to your favorite god anytime.

Pilgrimages are also a popular form of worship especially now that travel in India has got both more reasonable and comfortable.  Popular destinations might include on of the seven holy cities (Varanasi, Ujjain, Dwarka, Kanchipuram, Ayodhya, Mathura, and Hardwar) or the holy rivers (the Ganges, Kaveri, and Godavari).  There are also sacred sites on river banks known as tirthas or fords which are thought to be crossing places to the divine. 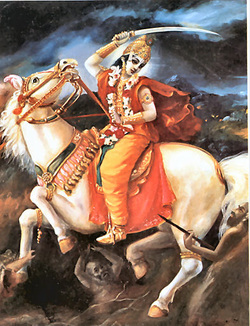 Another aspect of Hinduism that I found eerily fascinating was their concept of time.  For Hindus time has no beginning or end but does end and start over every now and then.  You see Hindus believe that time is divided into great aeons called “mahayagas”.  Each mahayaga lasts for 4.32 million years beginning with the creation or recreation of the world and ending in it’s destruction, after which the whole process will start all over again.  Within each mahayaga are four yugas or smaller aeons which are divided up as follows:


Krita yuga-   This is the beginning yuga, a period of 1,728,000 years where everything looks pretty great.  This is a world were men and gods are still very close and virtue reigns supreme.  The average human lifespan is 100,000 years and a relationship with God can be attained through meditation.


Treta yuga-  This next yuga lasts 1,296,000 years and things are still going quite well.  The average human life lasts around 10,000 years and although a bit of decay in morality has started virtue still wins out by about ¾ popularity.  Relationships with God here are attained by sacrifice.


Dwapar Yuga-  By yuga number three things are starting to look a little grimmer.  This yuga lasts 864,000 years and here Virtue and Vice fight it out at about half and half with the average human lifespan down to 1,000 years.  Relationship with God is still available via temple worship but humans are beginning to loose touch with themselves and their spirituality, forgetting who and what they really are.


Kali Yuga-  The last, final, and crappiest of the yugas this one lasts 432,000 years and vice outweighs virtue by 75%.  The average human life span is down to a mere 100 years and humanity has lost a great deal of touch with who and what they actually are with spirituality beginning to blur or snuff out altogether.  At the end of this yuga Vishnu's last avatar will return on his white horse and Shiva will appear, destroy everything, and the world will begin again with humanity being returned to their true enlightened state.

Care to take a guess where we are in the span of things?  Sigh.  About 5,000 years into Kali Yuga.  Here’s an ancient prediction about our era:

"In the Kali Yuga, the hot-bed of sin, men and women are all steeped in unrighteousness and act contrary to the Vedas… every virtue had been engulfed by the sins of Kali Yuga; all good books had disappeared; impostors had promulgated a number of creeds, which they had invented out of their own wit. The people had all fallen prey to delusion and all pious acts had been swallowed by greed."

Sound familiar to anyone?  Yeah me too.  If you look around and don’t find it hard to relate, still know that things could (and purposively will) get worse.  Some scholars say that by the end of this era people will live to be only 20 and will feed solely on meat. 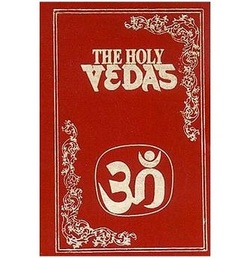 A great way to find out more about any religion can be to take a look at some of it's Holy books, but I warn you, in this instance there's alot of them.   Here are some of the most famous, which you can read by clicking on the link below.

The Vedas- are the oldest texts of Hinduism and among the only to be considered infallible.  Some of the oldest parts of the Vedas date back to the second millinium BC and are said to have been composed by ancient priests and sages who recorded instructions for the performance of ancient rituals and worship methods.  They consist of four parts:

The Rigveda-  hymns and prayers

The Samaveda- parts of the above hymns and prayers that are arranged in the form of chants.

Yajurveda-  which deals with sacrifices

Atharvaveda-  a mixtures of hymns, spells, and worship methods used by the ancient priests.

The Upanishads- appeared around 800-500 BC and are commentary written on the rituals and worship methods described in the Vedas.  Knowledge seemed to be the main concern of these texts rather than the ritual and sacrifice described in the Vedas.  Around this point Hindus began to see fire sacrifice as being an internal action done symbolically in the heart rather than the literal sacrificing of an animal.  In the Upanishads the reader can see Hindus begin to question the relation of the soul to the universe as well as god.

Puranas-  a complete history of the universe that includes records of kings, gods, ect.

Kamasutra-  famous in the West for it’s chapters on sexual pleasure this was a sort of ancient guidebook for the well bred townsman.  An ancient self-help/sexuality book that is still used today.

The Mahabharata-  an ancient Indian epic which deals with a war between two sets of cousins; the Pandavas and the Kauravas.  Also a philosophical work, it also contains that Bhagavad Gita, one of the most popular Hindu texts which is often considered a work in it’s own right.

The Ramayama-  The story of Vishnu when he descended to earth in the form of Rama.  These works contain many of the foundations for ancient and modern Hindu myth.

Brahmanas and Aranyakas-  other famous commentaries on the Vedas and proper performance of rituals.