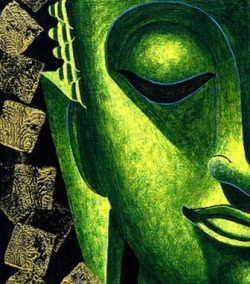 Key points to keep in mind:

-  Buddhism can be referred to as a way of life sometimes rather than a religion because it does not acknowledge or believe in a God or gods.  Buddha is many times mistaken by Westerns as the god of Buddhism but he never claimed to be a deity, only a great teacher.

-  Buddha very much encouraged his followers to question their beliefs, even if they were things that he himself had said.  It's very much a religion of personal interpretation rather than a set of rules or definite facts. 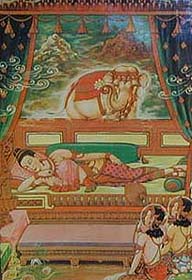 The term Buddha actually means "awakened one", so technically there have been many Buddhas and will be many more according to this system of belief.  (Kind of like the Pope is an actual guy but there have been and will be more than one.)  None the less, where Buddha is referred to here it means the first Buddha who developed the theory behind the whole thing.

It all began way back in 563 BC when a Prince named Siddhartha Guatama (who I'll hence refer to as Sid for short) was born to king Suddhodana and his wife Maya (who was rumored to be beautiful beyond belief).  The two ruled a small kingdom near the border of India and Nepal and were both members of the Sakya clan.

Legend has it that Sid's mom had a dream on the night of his conception that a white elephant had entered her womb.  Whereas some of us Western ladies might freak out that this was an early warning sign against childhood obesity, Sid's mom took it as a sign that her baby was going to be very special.
This was confirmed when he was born and a "seer" descended from the hills and prophesied that the baby boy would have one of two destinies:  1)  he would be a world conqueror and great ruler or 2)  that he would become an enlightened holy man.

As parents are prone to do, his dad decided that he knew the best route for his son and lavished the finest education and attention on him to turn him into a great world leader.  He decided that if his son was kept busy with the pleasures of life rather than ever becoming aware of it's hard facts, this was a sure recipe for path # 1.

So he kept Sid busy inside the palace, not only with studies but also building him a...let's just say, "chamber of love" that would put the playboy mansion to shame.  Only young people were allowed into the palace because Sid's dad didn't want him to know that everyone gets old, sick, and dies. 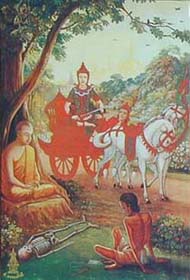 Well eventually as Sid grew up he began to get curious, as young men are prone to do, about life outside the palace walls.  So he decided to take a couple of trips to see what was on the outside.  However each time he did, he saw something that highly disturbed him.  Legend has it that on the first trip out, he saw a old, bent toothless man.  The second trip out he saw a maimed, diseased guy.  And the third trip out was the kicker, when he saw a dead body.  These facts are hard enough for most of us to face on a day to day basis, imagine seeing them for the first time when you were already grown up, married, and had a baby (by the time Sid had married and had a son). 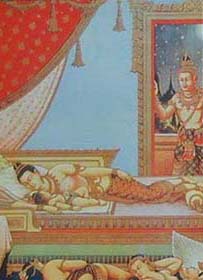 From that point on, Sid's world of pleasures seemed empty and meaningless, especially after realizing that no one was safe from the horrors that he had met on the road.  How could he go on, he wondered knowing that the world was made up of such suffering and that he, his wife, and even his baby where at risk?  Well as it turned out he couldn't.  One night when he was about 29, he snuck in and bid his wife and baby a silent farewell as they slept, resolving to come back when he had made sense of the world and it's horrors.  With no time to waste, he went out to the edge of the forest, cut off his beautiful hair with a sword, and traded in his spify palace clothes for the simple robes of a holy man. 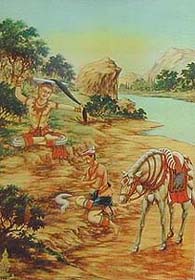 Contrary to what you might think, Sid didn't just stumble out of the palace and into enlightenment, in fact he wandered around looking for it for years.  And there were several people he studied with along the way.  Most where famous Hindu holy men who taught that we all have a soul or "atman" and that our soul is reborn in another body when we die.  Our actions in this life determine through a process called "karma" what kind of body we will be reborn into in the next life.  For instance if you are a great person in this life you might be born into nobility in your next life.  If you are a crappy person now you might be reborn as a goat.

Sid thought there had to be more to the picture however and continued looking for truth.  Along the way something he found about the religion of his time was that parts of it had become very ritualized, with people stressing things like animal sacrifice over a relationship with God.  Sid eventually spoke out against these sacrifices and hollow ceremonies as he saw them as nothing more than ways to manipulate God to get what you want.  There were also a group of men called Brahmins who were sort of the religious peddlers of the day.  Just as Jesus clashed with the Scribes and Pharisees of ancient Judaism, so too did Sid see the religion of the Brahmins as hollow.

A glance at the picture here may lead you to believe that Sid took a little time off to try Atkins at this point, but unfortunately it was much worse.  This picture is meant to depict a time he fell in with a group of holy men called Jain.
The original lore of the Jain for Sid may have been that they moved away from scholarly religion and ritual in favor of moral action and karma.  The all but ignored the Brahmin and instead focused on what they believed to be moral lives.  However the things they considered to be moral were where the problems started to arise.
You see the basic idea here was that the soul gets trapped in the process of being reborn because of all the karma you create through your actions in life.  So the solution was to act as little as possible.  Only in this way, could the cycle of karma be defeated and allow the soul to rise to a state of tranquil bliss.  The goal was in essence, to avoid everything from killing bugs, to having passions (which might lead to things that lead to bad karma), but instead basically master enough self-control to more or less sit still long enough to starve to death.  Some of the Jains went about in the nude as a symbol of being detatched from the world, and were sometimes depicted as having vines all around them from sitting still for so long.

Sid gave this a heck of a shot for about 6 years until he was reduced to a walking corpse.  One day he collapsed by a river and was discovered and norished back to health by a young girl.  At this point he decided this life of torture was no more significant than his life of pleasure in that palace. 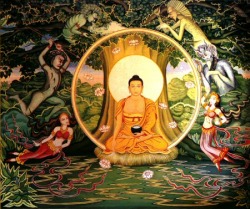 At this point Sid was at his wits end.  All his hard work and wondering had led to nothing, so he made a crazy decision.  He hiked up to a tree, sat beneath it and vowed to stay there until he either meditated his way to truth or died. There he went into a deep trance and eventually into an unconscious ecstasy.  It was there that he reasoned out the nature of pain, the way around suffering and how to achieve what would eventually become known as nirvana.

What he came up with 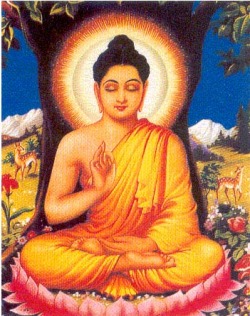 This, for myself and probably many Westerners not unlike me is where things get a wee bit confusing.  I offer this section because it's pretty essential to understand the rest of the theology but I also add the disclaimer:  don't be frustrated if
it doesn't immediately make a whole lot of sense to you.  While the principals themselves build off of it, they themselves are pretty straightforward.
Okay so basically where Sid, now Buddha started was with these ideas:
1)  Anatman-  We have no souls and indeed must reject the concept of "self", because it isn't real.  Huh you say?  Allow me to attempt to explain.  Buddha believed in a concept called anatman or "no self".  Whereas most Hindus argue that everyone has a soul that goes on through reincarnation, or that Christians believe goes to Heaven, Buddha says that no such soul exists.  He goes on to say that a belief in a soul can cause evil because then all our actions are based on seeking a reward in the afterlife, therefore there can be no self-less acts.
2)  Even more shocking than the idea of a self that doesn't go on after death is the idea that there isn't even one during life.  We relate to ourselves as a particular being with a name, a personal history, memories, thoughts, emotions, and dreams but all of this is actually an illusion and the person we believe ourselves to be is fictional.    These are all projections of the mind and are empty.
So why then do we feel the concept of "I" if it isn't true?  The answer is what Buddha called the five aggregates.  They are feeling, perception, disposition, consciousness, and body.  Because of these things we get what Buddha believed was a false sense of 'self' but we are actually nothing more than a bundle of perceptions.
3)  Here for me was where it hit the fan mentally:  though Buddha doesn't believe we have souls, he still believes in a form of reincarnation and karma.  But if we have no souls or for that matter individuality what exactly is it that reincarnates?
The Buddha attempted to explain by saying that each new moment in time was a completely different reality than the last, but that what that moment is depends on the one before it.
Here's the best way I've heard it explained:  Imagine you light a candle that burns through the night.  Then you light a separate candle and blow out the flame on the first.  Then you light a third candle and blow out the flame on the second and so on.  At the end of it the day, the flame on the last candle isn't exactly the flame from the first one, in fact it's constantly changing even as it exists.  Yet there is still a casual link between the flames of all the candles.  That link is like the link between our lives being lived through different bodies.
4)  Samsara- The process I described above is lived out through a process called samsara or the wheel of life.  The goal of Buddhism is actually escape the wheel of life and living, in essence to extinguish your own candle and possibly existence.  Why?  Because as Buddha states in his teachings, all of life is actually suffering.

Next Page (Teachings of Buddha)