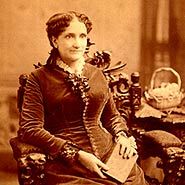 -  Not to be mistaken for Scientology.  They actually have nothing to do with each other.

-  The lady behind this belief system is pictured on the left and was named Mary Baker Eddy.  Mary was very interested in health and set out to find a spiritual principle for healing in the New Testament.

-  She reportedly did achieve recovery from was thought to be a severe accident using the principles she uncovered.

-  She and a group of her followers started what they then called the Church of Christ, Scientist in 1879.

-  Believe that God is completely good and totally spiritual and all things are in His image.  Thus actual reality is only spiritual, not material.

-  There is no clergy, only Christian Practitioners who heal through the means detailed above.

-  There is no Eucharist and communion is supposed to represent a meal Jesus had with his disciples after He was resurrected, rather than His traditional last supper before His death.

-  The central focus of a service is a lesson-sermon which talks about and expands on sections of Mary Baker Eddy's book.

-  Christian Scientists claim to practice healing based on a set of laws about God in relation to His creation and believe they can expect consistent, scientific results.

-  Though members most often do use these non-medical, spiritual principals for healing, no one is forced to use them if they decide traditional health care would be the better route in any given situation.  Though most consider prayer a better remedy than medicine, no one is shunned for going to a regular doctor rather than a Christian Science Practitioner. 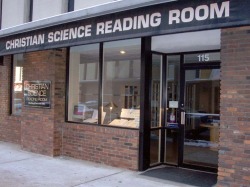 -  Study and Prayer and both very important parts of the faith, therefore all Christian Scientist churches have reading rooms where their members can go and study.

-  Though they believe that a transformation or spiritualization of a person's thoughts heals their condition, they claim that they are not the same as faith healing.  In faith healing, God is pled with and His will is accepted, good or bad.  In Christian Science God is the great healer and His only will is for the health and happiness of His creatures.

-  In the past century over 50,000 accounts of healing have been verified.

-  Christian Science theology is based on the Bible and the teaching, death, and resurrection of Jesus are all recognized as parts of the faith.  However it is believed that Jesus, though the Son of God, was not one with the Father.  Christian Science says He embodied the divinity of God and was the promised Messiah but He Himself was not divine and only the Father should be worshiped. 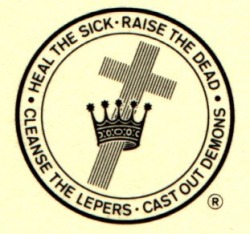 -  Believe in Heaven and Hell only as states of mind but not as physical places or parts of the afterlife.  They believe that we are all on a path that we can direct daily, deciding whether we want to go toward or away from God.

-  Mary Baker Eddy wrote a book called Science and Health with Key to the Scriptures which is a great way to start if you want more info on this belief system.  Christian Scientists also have an international daily newspaper called The Christian Science Monitor.

-  For accounts of verified healings, check out:
Healing Spirituality
A Century of Christian Science Healing
both of the above published by The Christian Science Publishing Society
and
Spiritual Healing in a Scientific Age by Robert Peel