Do Catholics Pray to Mary and Statues? 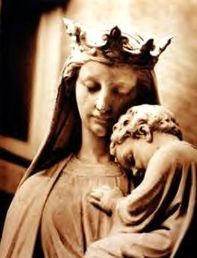 This is a common misconception among non-Catholics and one that I’m going to break down into two
parts to attempt to explain.  As far as praying to Mary, many non-Catholic Christians see Catholics doing prayers like the rosary and fear that praying to Mary violates God’s command to pray only to Him.

However, Catholics aren’t so much praying to Mary as asking her to pray for them.  In other words they are praying through her.  The best example I can think of it if you’ve ever been a part of a prayer circle where friends share prayer requests and ask others to pray for them.  The same concept applies to Catholics
who ask Mary to pray for their various prayer needs.  After all, Catholics reason, who better to ask to pray for you than God's own mom?

As far as the statues, this is another one I’ve heard a lot of concern on from non-Catholics as well because of the stigma attached to praying to idols, which is forbidden in several different religions.  This too however is no more than a
common misconception.  Though this may seem like a funny way to describe it, picture the same concept as when you skype with loved ones in far of areas of the country.  In those instances are you talking to a computer screen?  No, you are having a conversation with someone who isn’t directly in front of you and their image on the screen just helps you picture their face and
makes the conversation a bit more intimate.  So if you see a Catholic praying in front of a statue of Jesus, they aren’t praying to the statue but to Jesus Himself, as they use the statue to establish a visual.