Is Mormonism a cult? 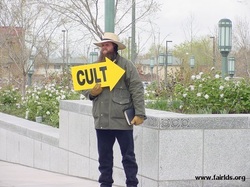 This one really comes down to what you're definition of the word "cult" is, in a sense many religions started out as what some called cults at the time and grew from there.  Personally I have known some great Mormons and been impressed with the amount mission work and level of devotion the religion produces so I hesitate to confine it to such a stereotypical and negative word.

So rather than try and peg Mormonism as a cult one way or another, I'm rather going to explain the aspects of it that may be the reasons that some people refer to it as one.  Among the largest issues that have come up with Mormonism over the years is that they have a group of leaders known as "Prophets" and "Apostles" who claim to have a direct line to God.

This in itself is not so much the issue, but rather the problem comes in when you realize that these revelations are practically forbidden to be questioned, even if followers think they are wrong.  Such sketchy revelations of the past include those of LSD leadership who told German church members to support Adolf Hitler or the infamous Meadow Mountain Massacre of 1857 (chronicled in the movie “September Dawn”) in which a group of Mormons and Native Americans massacred a wagon train of settlers due to a revelation.

As you’ll see from the quotes below made by leaders in the Mormon Church, if infallibility of Mormon leaders is not outright preached it is certainly implied, which strikes many outside the church as a bit “culty”.  It was also for these reasons that some have questioned the ability of Mormon political candidates such as Mitt Romney to govern in a secular society.  The concern being whether a man who must treat the revelation of another set of men as the inspired word of God, can make large decisions based on his own conscience, even and especially if they were out of line with the church leaders revelations or orders.

“Always keep your eye on the President of the church, and if he ever tells you to do anything, even if it is wrong, and you do it, the lord will bless you for it but you don’t need to worry. The lord will never let his mouthpiece lead the people astray.”
LDS President Marion G. Romney (of the first presidency), quoting LDS
President(and prophet) Heber J. Grant “Conference Report” Oct. 1960 p. 78

It’s wrong to criticize leaders of the Church, even if the criticism is true.
-Elder Dallin H Oaks

“Any Latter-day Saint who denounces or opposes whether actively or otherwise, any plan or doctrine advocated by the prophets, seers, revelators’ of the church, is cultivating the spirit of apostacy. One cannot speak evil of the lord’s annointed… and retain the holy spirit in his heart. This sort of game is Satan’s favorite pastime, and he has practiced it to believing souls since Adam. He {Satan} wins a great victory when he can get members of the church to speak against their leaders and to do their own thinking.”

“When our leaders speak, the thinking has been done. When they propose a plan–it is God’s Plan. When they point the way, there is no other which is safe. When they give directions, it should mark the end of controversy, God works in no other way. To think otherwise, without immediate repentance, may cost one his faith, may destroy his testimony, and leave him a stranger to the kingdom of God.”
-Both above from Ward Teachers Message, Deseret News, Church Section p. 5, May 26, 1945
Also included in the Improvement Era, June 1945

“Unquestioning obedience to the Lord indicates that a person has developed faith and trust in Him to the point where he or she considers all inspired instruction — whether it be recorded scripture or the words of modern prophets, or direct inspiration through the Holy Ghost — to be worthy of obedience.” - Elder Robert C. Oaks

“The Lord Almighty leads this Church, and he will never suffer you to be led astray if you are found doing your duty. You may go home and sleep as sweetly as a babe in its mother’s arms, as to any danger of your leaders leading you astray, for if they should try to do so the Lord would quickly sweep them from the earth.”
Brigham Young, Journal of Discourses, Vol. 9, p. 289, 1862.

“When the Prophet speaks the debate is over”.
N. Eldon Tanner, August Ensign 1979

“The Lord will never permit me or any other man who stands as President of this Church to lead you astray. It is not in the programme. It is not in the mind of God. If I were to attempt that, the Lord would remove me out of my place, and so He will any other man who attempts to lead the children of men astray from the oracles of God and from their duty.”
President Wilford Woodruff
(Sixty-first Semiannual General Conference of the Church, Monday, October 6, 1890, Salt Lake City, Utah. Reported in Deseret Evening News, October 11, 1890, p. 2.)

“I have never yet preached a sermon and sent it out to the children of men, that they may not call Scripture” -Brigham Young (Journal of Discourses, vol. 13, p. 95)

Back to Religious Stereotypes