How do Muslims feel about Christians? 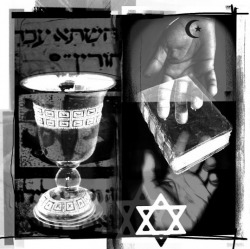 Alot of questions have arrisen in the past few years regarding how Muslims view Christians, stereotypes aside.  As it turns out both Jews and Christians are mentioned in the Koran where they are referred to as "People of the Book" and there are some things that Muslims agree with them on and others they don’t.  In general Muslims have no problem with Christians and Jews worshipping in their own ways even if they believe they are a bit off on some things.

-  Muslims do acknowledge that Jesus was a great prophet of God but the fact that Christians claim that he was God tends to disturb them.  The whole idea of the trinity doesn’t make since to them, and seems very threatening to the idea that there is only one God, even though Christians technically also believe this.

-  They do not believe that Jesus was actually crucified but was rescued by God at the last moment and someone else took his place.  The Koran states:

"That they said (in boast), 'We killed Christ Jesus the son of Mary, the Messenger of Allah'—but they killed him not, nor crucified him, but so it was made to appear to them, and those who differ therein are full of doubts, with no (certain) knowledge, but only conjecture to follow, for of a surety they killed him not—nay, Allah raised him up unto Himself.”  Surah 4: 157-158

-  They do acknowledge that the Torah, the Psalms, and the Gospels all came from the same God as the Koran, but they believe that all but the Koran have been distorted over time by man and that these earlier books cannot be fully trusted in the same regard that the Koran can.

-  Islam is a works based religion (salvation is not guaranteed, good and bad works are weighed on Judgment day and whichever outweighs the other determines where you spend eternity) whereas Christianity is a faith based religion.  This is one of the main reasons they don’t believe Christ died on the cross, they don’t believe it was necessary.  Muslims don’t believe in original sin, but believe that everybody is born pure in spirit and makes the choice to do right or wrong which determines their eternal destiny.

-  Even though Muslims believe that Christians are a bit off on this point, they don't necessarily believe they are all going to hell but simply will be judged according to their own set of beliefs:

"Surely those who have faith (in Islam) and the Jews and the Christians and the Sabaeans - whoever believes in God and the Last Day - their reward is with their Lord and they will neither fear nor grieve" (Quran 2:62 and 5:69).

In general, as long as Christians pose no threat to Islam or their way of life, Muslims are not prone to religious intolerance as they believe that  “There is no compulsion in religion” (Surah 2:256) and that "And mankind is naught but a single nation"-  (Surah 2:213)