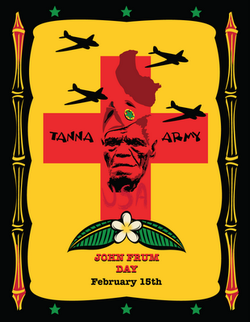 An example of what many scholars refer to as a “Cargo Cult”, the John Frum movement first made it’s appearance in the 1930s and 40s.  Believers worship a mythic figure named John Frum, which some scholars believe to have come from manifestations of Western figures such as Uncle Sam, Santa Clause, and John the Baptist.  Prior to contact with outside nations these islanders lived in primal tribal societies and are the source of many stereotypes about native islanders including cannibalism, as apparently their enemies as well as an unlucky missionary or two were also used as food in the past.

When the islands where eventually colonized and ruled jointly by the French and British, missionaries turned out to also be included in the deal and soon islanders began to be forbidden certain aspects of their traditional culture such as dancing, swearing, or polygamy.  The figure of John Frum may be originally based on an islander that did rally a group of his countrymen to move inland to escape the new culture imposed on them.  Mr. Frum is also said to have appeared to the people in visions  urging the rejection of Christianity and a return to Katsom, the traditional culture.  Followers believe Mr. Frum, a now purely mythical figure, divides his time between Yasur, a volcano on the island of Tanna, in which he and his armies are said to live and America ,as he is also known as the “King of America”. 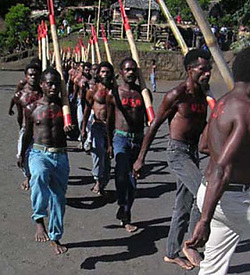 The American aspect of Frum’s image may have originated in World War 2 when American soldiers occupied and built bases on the islands.  Islanders watched in wonder as technology, clothing, even coca cola was dropped from the sky in shipments the soldiers referred to as “Cargo”.  An additional amazement was the site of black American GIs who the islanders believed may have been the descendants of John Frum, an assumption which helped recreate his image as an American infantryman.  The soldiers recruited the islanders help in building airstrips, hospitals, and other war necessities which were strange and wonderful to the islanders.  However when the war ended the soldiers were gone as soon as they came, taking with them the ability the natives had so admired to produce cargo from the sky.  Unwilling to lose the new technologies that had come to the island, the islanders built their own airstrips and attempted to summon the cargo as the soldiers had by carving their own headsets and even attempting to make air traffic controllers.  To this day their most sacred symbol remains the red cross.

Believers insist that some day John Frum, who by this time had become a sort of Messiah, will return from America and bring with him enough cargo to make the island prosperous and meet all its needs.  Each year on Feb 15, islanders celebrate John Frum day by dressing in homemade soldier pants and painting “USA” on their bare chests and backs.  They then raise a mock US flag and march in perfect unison with homemade bamboo rifles around the volcano where Frum is said to live.