How do Muslims feel about Americans? 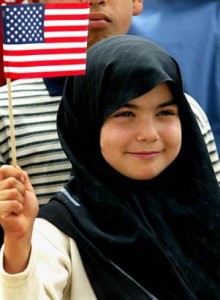 After the 9/11 terrorist attacks, a question that has become heard all too often in America is, “do all Muslims really want us dead?” For a moment, let's all step back, turn down Glenn Beck, and really think about that question.  Because as soon as you do, the answer is sort of in itself.  A few facts to consider:

-Roughly one billion people- about a fifth of the world's population- identify as Muslims.  If they all really wanted us dead, we’d be facing nothing short of World War 3.

-Of the top ten countries in the world that have the largest Muslim populations, only two of them are in the middle East.  (Iran and Egypt)  Most Muslims actually live in Asia.  Indonesia (which is a secular democracy) has three times the Muslim population than Saudi Arabia, Afghanistan, and Iraq combined.

-Lots of Americans are Muslims.  According to a 2010 estimate by the Council on American-Islamic Relations (CAIR) there are probably around 7 million Muslims who currently call the United States their home and would probably join the rest of us in preferring not to see it destroyed.


-  Hundreds of Muslims where killed in the 9/11 attacks.

That said however, there are defiantly a handful of radicals who do alot of horrible things in the name of Islam that wish us, let’s just say nothing but the best.  The trick is realizing though that terrorists Islamic groups and general Muslims are two very different things.  Thinking of Osama bin Laden as a model Muslim is sort of like a Muslim thinking of Fred Phelps or Jim Jones as a fine upstanding Christian.  Just as these freak shows have nothing to do with the essence of Christianity, Islamic militant terrorists are a far cry from most followers of Islam.  Unfortunately for whatever reason the media insists on highlighting only the bad guys, a problem that is in my opinion very relevant in Christianity as well.  But don’t take my word for it, for a look at what most Muslims around the world really feel about terrorism, take a look at what they’ve got to say here: 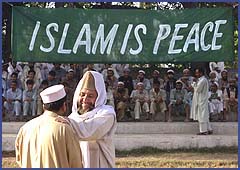 Many Americans are surprised to find that at its core, Islam is actually a very peaceful religion, and there are no verses in the Koran that permit violence, other than in self defense.  Lies, some will argue!  And then probably quote a certain verse they have heard about infidels or violence.  But the trick here is one of the most important when dealing with any holy book, we HAVE to always remember to take things not as an overall statement to humanity but as individual statements written at a particular time and to a particular group of people.  Consider for example the following verses:


“I will bring terror on you, from all those around you.”  Declares the Lord God almighty.


“The sword will devour till it is satisfied, till it has quenched its thirst for blood.”


Little bit violent?  Yep.  But some might be surprised to find that all of these verses are not from the Koran but from the Holy Bible (in chapters 46-49 of Jer.).  Not the God you recognize?  That’s because this was during a very specific time in the history of Israel and humanity when God had been driven into a rage by constant disobedience, idolatry, and child sacrifice with several different ancient civilizations that he was simply put fed up with.

But as far as the Koran, let’s take a look at the verse that is most famously quoted regarding Islam as being violent:

"But when the forbidden months are past, then fight and slay the Pagans (infidels) wherever ye find them, and seize them, beleaguer them, and lie in wait for them in every stratagem (of war)” Surah (chapter) 9:5

What most people fail to do, however is to finish with the last part of the same verse which reads as follows:

“but if they repent, and establish regular prayers and practise regular charity, then open the way for them: for Allah is Oft-forgiving, Most Merciful."  Surah 9:5

In fact the verse right after goes a step further:

"If one amongst the pagans ask you for asylum, grant it to him, so that he may hear the word of God; and then escort him to where he can be secure."  Surah 9:6

What was going on here that we need to keep in mind, was that Muhammad and his followers were living an a pretty wild time on the 7th century Arabian peninsula where tribal wars were rampant.  The people they were referring to here were neighboring tribes who had not only broken treaties with the Muslims but where bent on destroying them and their beliefs.  So these verses aren’t commanding Muslims to pick a fight with them because they happen to be idol worshipers, but warning that there may come a time they have to defend themselves and fight back.  But however:

If you'd like to see more or join others in speaking out against terrorism, here are some great links to check out: