Why does Osama bin laden hate us? 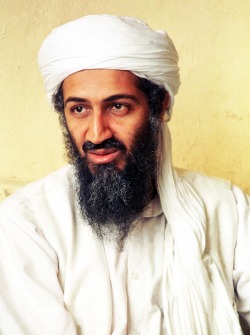 Simply put, for several reasons that go back a lot further than most people realize.  I’m going to make a very long story short but if you’re interested, I highly suggest looking more into these things because I feel like far too few Americans know the reasons we are involved in war, which is hard to understand considering how long we have been.

-  The whole thing arguably started back in 1979 when the Soviet Union invaded Afghanistan at the request of the Afghan government at the time.  The plan was to make Afghanistan into a Communist nation, which didn’t go over so well with most of the citizens of the country.  So a large group of Islamic rebels called the “Mujahideen” formed a resistance against the Russians who they saw as “Godless Communists”.  At the time Osama bin Laden was a very young, very rich man.

Although he was born and lived in Saudi Arabia at the time, bin Laden began to travel to the Pakistan border in order to deliver supplies and aid to the Muslim fighters.  He and his mentor Abdullah Azzam eventually became not only involved with these aspects of the war, but also began to train and place recruits, and finally became fighters and military leaders themselves.

At the time the Mujahideen where hailed as freedom fighters by nations such as the United States, Pakistan, and Saudi Arabia who also threw huge sums of money behind them.  During this time bin Laden and Abdullah Azzam established an organization based on the idea of launching an Islamic crusade to rid the Islamic world of Western influences, overthrow secular governments, and make Islam a global religion.  They called the organization ‘al-Qaeda al-Askariya’ which means “the military base” and called it al-Qaeda for short, meaning “the base”.  When the Soviets withdrew in 1989 bin Laden and the Mujahideen where hailed as war heroes in both the Eastern and Western world.

American presence in the Gulf War 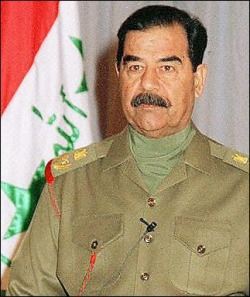 -  Meanwhile, cut to Iraq.  A war had been raging from 1980-1988 between the Iraqis and Iran.  During this time several Middle Eastern countries including Kuwait and Saudi Arabia had loaned Iraqi Leader Saddam Huissen very large sums of cash.  When the war ended with no clear victor Saddam was furious and demanded everybody not only forgive his loans but give him an additional 30 billion in interest free loans.  When Kuwait said nope, Saddam invaded and overtook the small country with little problem.

Cut back to now war hero Osama bin Laden who was now back in his home country of Saudi Arabia.  Sure that Kuwait’s fate was about to befall Saudi Arabia as well, Osama started educating his fellow Saudi’s about the perceived danger, proclaiming it in the mosques as well as distriputing tapes he had made.  This raised a few eyebrows from the Saudi royal family, who Obama’s family had had a long friendship with.  Regardless, Osama felt pretty confident that when Saddam did strike, the royal family would turn to him and a group of Afghan veterens that he had offered to assemble to protect the country.  However, when it did indeed prove that war with Iraq was afoot, bin Laden was shocked to find that Saudi Arabia turned not to him but to….drum roll…the Americans.  That’s right, an international coalition of military forces led by the US of A was to protect Saudi Arabia instead of him.  Osama saw the presence of Christian soldiers in his country as a disgrace because Saudi Arabia is not only Muslim but contains many of the very holiest sites in the Islamic faith.

Additionally he was horrified to find that the United States would be sending over not only Christian but female soldiers.  American women protecting Saudi men was an unthinkable blow to Osama who began to speak out against the royal family, claiming that they were making the country a colony of America.  He proclaimed that the Americans had inacted an elaborate plot to Westernize the Islam holy lands and that the royal family was sitting by and allowing it to happen.  This went on to the point that he fled the country for fear of arrest and set up a new shop in Sudan (in Africa). 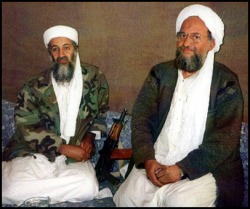 -  While in Sudan bin Laden sat up a sort of melting pot for terrorists so to speak.  After the Afghan war, it turned out lots of the fighters were denied reentry to their own countries, so bin Laden took them under his wing, giving them jobs in some of the shops and factories he established in Sudan as well as setting up training camps for fighters in what he perceived as a war on Islam.

During this time, several other terrorists joined him in his encampments, including men whose aims where to overthrow the Egyptian government and replace it with a purely Islamic one.  The overall feeling of pretty much everybody though was that a world ruled purely by Islam was a perfect world and that is still their dream to this day.

Meanwhile as the Saudi Arabian government got wind of bin Laden and his friends terrorist activities, which they were beginning to enact in various countries around the world, bin Laden was shocked to find out that his Saudi citizenship had been revoked and all his bank accounts frozen.  This cost him the equivalent of millions of dollars.  Additionally the United States, Saudi Arabia, and Egypt where putting pressure on the Sudanese government to rid the country of Osama and his terrorist friends.  After one of the said terrorist friends’ groups unsuccessfully tried to assassinate the Egyptian President, Sudan buckled under the pressure and bin Laden was again forced from his home, with America partially to blame.

After this Osama relocated to Afghanistan where he arguably still is today.  When he got there he met up with another pretty radical group known as the Taliban who at first offered him their protection.  Although they later asked him to leave for drawing too much attention from the outside world, bin Laden was able to convince him to allow him to stay because it’d be better (in his mind) for Islam.

Another reason for the hatred that may surprise some Americans goes back to Israel.  You see in the country of Israel, the Jews and the Arabs have been fighting for a long long time.  The fight is indeed over land, but not just any land, very holy land for both sides. and our alliance with them.

The Jews argue that the land of Canaan or Eretz Israel (land of Israel) belongs to them by divine right as promised by God in the scriptures of the Torah.  However the Muslims point out that the land was promised not only to the descendants of Isaac (the Patriarch of the 12 tribes of Israel described in the Torah/Old Testament, the ancestors of modern day Jews), but to all the descendants of Abraham (Isaac’s father).  They claim that this would include them as descendants of Isaac’s older brother Ishmael.  Muslims have also built many of their own holy sites on the land over the years including the Dome of the Rock and the Al-Aqsa Mosque.  In addition, they believe that Muhammad passed through Jerusalem on a trip to Heaven, making the city all the more sacred for them.  Many Zionist Christians side with the Jews, believing that the New Testament of the Bible (particularly Paul’s letter in Roman’s Chapter 11) does specify that the land was promised to the Jewish people.  Many in this group also see the Jews’ return to Israel as a prerequisite for the Second Coming of Christ due to various ancient prophecies.

Due to America's largely Christian population and because of American/Israeli alliances, Osama bin Laden came to associate America with Israel to the point that he saw it as one country.  In a tell all book written by Osama’s wife and son, his fourth son Omar recalls his father remarking in a conversation that

“The Americans want the oil of course, but another goal is to enslave Muslims.  Americans hate Muslims because they love the Jews.  In reality, America and Israel are one country, not two.”

Osama goes on to explain to his son that in order to destroy Israel, ultimately they must destroy America.  In a chilling account of how he intends to do so, he goes on to say:

“First we obliterate America.  By that I don’t mean militarily.  We can destroy America from within by making it economically weak, until its markets collapse.  When that happens, they will have no interest in supplying Israel with arms, for they will not have extra funds to do so.  At that time, [Israel] will corrode and be destroyed by lack of attention.”

Osama’s ideas about destroying America’s economy by keeping the nation locked in an expensive war for as long as possible were verified in a 2004 video tape.  In a statement he explains his strategy:

"[It is] easy for us to provoke and bait this administration. All that we have to do is to send two mujahidin to the furthest point east to raise a piece of cloth on which is written al-Qaida, in order to make the generals race there and cause America to suffer human, economic, and political losses ... This is in addition to our having experience in using guerrilla warfare and the war of attrition to fight tyrannical superpowers, as we, alongside the mujahidin, bled Russia for 10 years, until it went bankrupt and was forced to withdraw in defeat."

Bin Laden has also acknowledged America’s alliance and activities with Israel as his inspiration for and involvement with the 9/11 attacks:

"Allah knows it did not cross our minds to attack the towers but after the situation became unbearable and we witnessed the injustice and tyranny of the American-Israeli alliance against our people in Palestine and Lebanon, I thought about it. And the events that affected me directly were that of 1982 and the events that followed -- when America allowed the Israelis to invade Lebanon, helped by the U.S. Sixth Fleet. As I watched the destroyed towers in Lebanon, it occurred to me punish the unjust the same way (and) to destroy towers in America so it could taste some of what we are tasting and to stop killing our children and women."

In fact the idea of defending women and children is often used as a training technique in various al-Qaeda based military camps.  Omar bin Laden describes scenes where,

It is explained to these warriors that Israel is like a glove war by American hands and that both must be destroyed to stop further atrocities of this sort.  Often the images they are shown are so heartbreaking that young men leave these meetings ready to give their own lives to defend the lives of Muslims worldwide that they are convinced are in horrible danger.