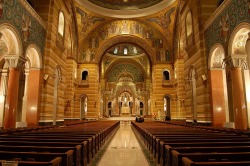 The largest Christian group that exists today, with over a billion followers.  Some of the distinctive beliefs in Catholicism are:

-  Mary, the Virgin Mother of Jesus- is held in much higher reverence than in some Protestant (non-Catholic) denominations.  She is considered not only the mother of God but also the predominant saint and "Queen of Heaven".  Many Catholics also believe that she was a virgin her entire life and that when the Bible refers to Christ's "brothers" it is meant in a purely metaphorical sense.  At the end of her life, Catholics believe she died surrounded by the Apostles, who later found her tomb empty and believed her to have ascended to Heaven.

- Saints - The Catholic church makes a selected few who live nearly perfect lives of virtue "saints".  Not that we suggest you quit your day job, but to learn how to become one click here.

- Intervention of Saints and Mary-  Many protestants mistakenly believe Catholics pray "to" Saints or Mary, when actually they pray "through" them.  For instance, have you ever asked a friend to pray for you?  It's the same idea, but goes straight to the top, to people who are thought to have the ear of God.

-  Sex-  Catholics believe that the purpose of sex should be to produce children and do not believe in using any form of birth control.  This is consequently why many times they have very large families.

Purgatory-  Whereas many Christian faiths believe that when you die you go to either Heaven or Hell, Catholics have a sort of in-between place called Purgatory.  They believe that souls go there that die before they have repented of all sin and that this is a place to work it off in a sense.

These are religious ceremonies or visible signs of spiritual grace.  They include:

1.  Baptism- is when a new initiate to the faith is either sprinkled or submerged in water, symbolizing their death as a person of sin and rebirth as a follower of Christ.  Often in the Catholic church this Sacrament is preformed at infancy as a way for the parents to dedicate the baby to God.

2.  Confirmation- is often preformed when a young Catholic is a teenager and old enough to understand what Baptism meant.    There is a part of the Confirmation called the laying on of hands which signifies the descent of the Holy Spirit and then the confirmed is annointed with oil that has been blessed by a Bishop.  This is accompanied by the words "Be sealed with the gift of the Holy Spirit."  This is sort of like sealing the Baptism.

3.  Holy Eucharist- This is a rite that only confirmed Catholics can take part in and is also known as the Lord's Supper or Blessed Sacrament.  It's where members of the Church eat bread and drink wine that are meant to be a recreation of Jesus' last dinner with his disciples before he was crucified.  The main difference between Catholics and many other denominations is that they actually believe that the bread is transformed into the body of Christ or inhabited by Him in some way.  Therefore it could be argued to be much more sacred.

4.  Holy Orders-  This is the sacrament where candidates for the offices of Priest, Deacon, or Bishop are ordained.

5.  Matrimony-  Getting Married.  Catholics take marriage reeeally seriously and if you are in you better be prepared to be in for life.  Divorce is very looked down upon and if you get one you can't get married again under the penalty of mortal sin.  You can however get a marriage annulled by stating things like one or more of the partners didn't intend to have children.  If this is the case the marriage can be considered invalid.

6.  Reconciliation-  This is the process of reconciling your sins with God through Confession and penance.

7.  Anointing the Sick-  this is a Sacrament for people who are...you guessed it, sick.  It can range from giving them a blessing for the courage to indure under the circumstances of the illness to last rights, which is a process of preparing a very sick person for death. 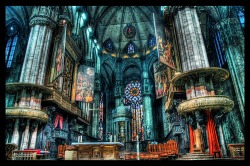 - Mortal vs. Venial Sin-  Whereas in some churches, all sin is the same in the eyes of God, not so in the Catholic church.  For instance though it was really mean to tell your brother-in-law that that Nair was a revolutionary new dog shampoo for his prized Yorkie, you're probably not going to go straight to hell for it.  This is what's called Venial sin, which are sins that are shall we say lesser.  Mortal sins like killing someone are (surprise) much more serious and are thought to land you in hell if not confessed before your death.


-  Confession/Penance-  Catholics observe the sacrament of Confession, where you confess your sins to a priest, who then determines if you are really sorry and don't plan to do them again.  If this is so, you are forgiven and leave with a clean slate.  Sometimes the priest will give you a "penance" or way to prove to God you're sorry.  This can be anything from saying some prayers to doing a kind act.

-  Not Sola Scriptura-  (means by Scripture alone) Which is the belief that the Bible is the only infallible authority for the Christian faith.  Catholics believe scripture is only one part of a three part structure that also includes Holy Tradition and the Church Hierarchy.  The Catholic Church also has a Catechism, which is a book that contains an official statement of all their teachings. 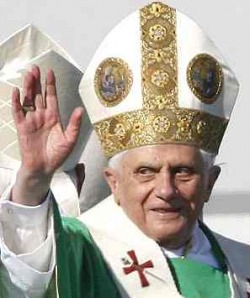 -  There is a Hierarchy or chain of command -  that goes as follows.
Priest- Each church is part of a distract called a Parish, which is run by a Priest.  His job is that of a pastor, to give the Sacraments and Masses (church services), to hear confessions and assign Penances.
Bishop-  a group of Parishes in a region are called a Diocese and are presided over by a Bishop.  Bishops are Priests that were nominated by other Bishops and appointed to their office by the Pope.
Cardinal-  These are Bishops who have been elected to the College of Cardinals by the Pope.  There are about 120 and membership is divided between those who hold office in the Vatican (the Roman Catholic Church's main headquarters) and Bishops of major world cities.
The Pope-  The Pope is the visible head of the Church and has supreme religious authority.
Jesus-  The invisible head of the church with way supreme authority.  The Pope's boss.

-Considered by some to be the "original" church as it was the only Christian church for it's first 1000 years or so.  At that point a monk named Martin Luther made some suggestions on some changes that could be made to help the church return to it's purest state.  However the Pope disagreed and excommunicated him, and this is when Protest (non-Catholic) churches were born.