Over the past few decades scientology has succeeded in becoming one of the most controversial new religions of it’s day.  The group sprang from the mind of L. Ron Hubbard, the author of the 1950s book “Dianetics” which is still championed as a work of genius by scientologists today and which many of their beliefs are based on.  “Dianetics” as well as “Scientology: a new slant on life” are sited by scientologists as the best way for outsiders to find out what they believe.

According to Dianetics, human beings have an inner timeline where every experience they’ve ever had is stored from birth til now and even before.  Many scientologists believe that experiences from inside the womb and past lives are recorded and very relevant as well.  However traumatic experiences, known as “engrams” which can be stored in the unconscious with particular clarity are believed to affect the lives of humans in ways most don’t even realize.  Scientologists believe that the avoidance of these experiences happening again can result in fear of anything that reminds us of them as well as irrational behavior and self-doubt.  Despite all the interest in the mind however it should be noted that in scientology psychiatry is viewed as very harmful, particularly because of it’s use of drugs and scientologists proudly point to many psychiatrists they have had shut down. 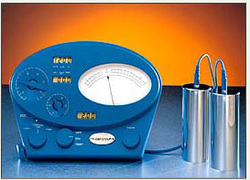 Scientology claims to another path to psychological freedom however, one known as “auditing” which is said to remove engrams and their effect on behavior.  This is done by answering specifically worded questions, asked by an auditor, that help a new scientologist discover engrams and areas of distress that may affect their lives so that they can begin to deal with them.  However since some of the memories we hold are buried so deeply in the mind, the use of an E-meter is often used.  This is an invention by Hubbard that is able to pick up on stress when certain topics are discussed and point the scientologist in the direction of old memories.  Scientology stresses that it is not the following of beliefs or creeds and doesn’t even involve faith, but rather a clear set of tools designed to help man reach a state of spiritual liberation, happiness, and awareness.  Those who have completed this process of auditing are called “Clears” and can continue to develop an inner self referred to as a “Thetan”.  They then seek to become “Operating Thetans” and can progress through different levels.

What's the Deal with the Aliens? 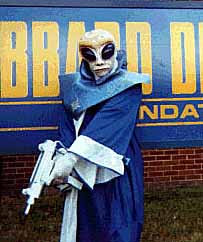 It’s what many ex-scientologists say happens at OP III or Operating Thetan level three that has raised a few eyebrows from outsiders.  On it’s webpage, scientology says this about itself:  “Scientology is the study and handling of the spirit in relationship to itself, universes and other life.”  What does “other life” refer to? Though this used to be scientology’s big secret it’s now pretty mainstream knowledge, though some Scientologists still deny it.  Some of that denial may be sincere however because as the ex-members who brought the secrets forth explain, even scientologists don’t have the following dumped into their lap until very far into their journey towards the upper levels of the religion.

It should be noted however, that many high level Scientologists have explained that the reason for the secrecy is that the story of Xenu is just a myth and that it's nearly impossible to make sense of when taken out of symbolic context.

Regardless, here it is in the form of a quote from an organization made up of ex-scientologists:

“In the OT3 materials basically say that 75 million years ago, an evil being named Xenu decided to solve a population problem on his galactic colony by exiling a bunch of people to Earth. Xenu then did a ton of horrible things to these people, like drugging them, placing their bodies around a volcano, and blowing them up with H-bombs.

But that really only took care of the physical problem - Xenu didn't just want the bodies gone, he wanted to make sure the 'thetans' (spirits / souls) of those people didn't come back and reincarnate on his colony. So when the souls started leaving the bodies, he captured the souls and forced them into a huge implant station that was kind of like a movie theatre. There, he made them watch movies that 'implanted' them with false pictures of Christ, and other historical events that Hubbard says didn't actually happen.

The souls were so screwed up from this implanting that they roamed aimlessly around Earth for millions of years. When human beings started evolving, the thetans started entering their bodies and inhabiting them, and thus these thetans are called 'body thetans'. And body thetans, says Hubbard, are the source of all human misery.

But that's just the theory portion of OT3. The practical portion of OT3 involves getting rid of these body thetans. The PC uses the Emeter to locate body thetans that are stuck to his body, and talk to them, auditing them until they blow (go away). “

Other things that have been called into question regarding the church include the fact that it is very expensive to join. Members are required to take classes that can cost hundreds of dollars a piece, which can obviously get very expensive if a member expects to study for the years the religion takes to master.  This expense is also a reason the religion has been pretty unsuccessful in catching on in the middle and lower classes. Additionally as the rumor has gone for many years, Hubbard was once overhead making a bet with freinds that he could start a religion in order to make money, which doesn't sit well with many people for obvious reasons.