How are lady Muslims treated? 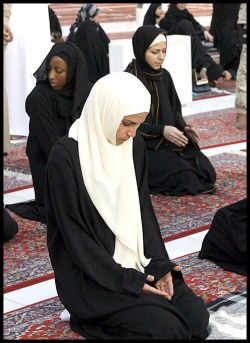 This is always a tricky one because as we all know, just because a religion specifies how a certain group should be treated, that doesn’t always mean they will be treated according to those specifications.  So in some instances there is a difference between how Islam says women should be treated and how they actually are, which really isn’t unique to Islam in that regard.  It’s kind of like saying, “how are Christian women treated?”  Kinda depends, on what country they live in, the culture, ect.  So I’ll try and stick to what Islam actually says.  Here’s some of the questions that come up often in relation to Muslim ladies:

Are women equal to men? 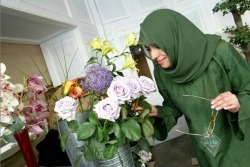 Islam scriptures and teachings insist that yes, women are different from but equal to men.  The man is traditionally the head of the household (as is true in many other religions, including Christianity and Judaism) but that means that he is more of a provider than a dictator.  In Muslim countries, men must provide for their wives, even if the wives are the wealthier of the two, which isn’t unheard of.  As one Muslim man testifies:

“women in Saudi Arabia, although they are about the most extreme example of modern segregated women, are among the wealthiest women in the world.  Because of Muslim laws of inheritance, women inherit independently; they have complete control in law over their property…so that in Saudi Arabia there are banks that service women only; and as far as I understand it, women own about one third of the property in Saudi Arabia.”[1]

Although in some more conservative countries, Muslim women keep mostly to the inside of their own homes, in more liberal countries they become, doctors, lawyers, teachers, ect.  Again this is more a question of culture than religion which is where a lot of Westerners get confused.


What’s the deal with the veils? 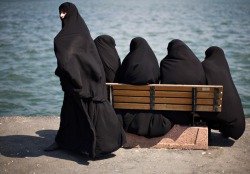 They are actually called a “hijah” which means “barrier”.  It can mean anything from a scarf to a full body covering worn by a woman.  Its origin is in the fact that Islamic law specifies that neither women nor men should wear provocative clothing, in order to avoid sexual arousal and temptation.  They are to see each other as people rather than sex objects.

Again, exactly how far that covering goes is really more of a matter of culture rather than religion.  Many of us Western ladies are prone to freak out when we see women clad in head to toe black shawls with nothing showing but their eyes.  In reality, the specification in Islam is that everything but a woman’s face and hands be covered, which comes down to not much more of a difference than a head scarf.  The only major difference however is that from all the information I’ve found pants on girls or women are pretty discouraged.

Are Muslim men allowed to beat their wives?

Yes and no.  First of all, this take a look at the Koran verse you probably heard referenced if you heard that this is the case, here’s one English translation:

“Men have authority over women because God has made the one superior to the other, and because they spend their wealth to maintain them. Good women are obedient. They guard their unseen parts because God has guarded them. As for those from whom you fear disobedience, admonish them and send them to beds apart and beat them. Then if they obey you, take no further action against them. Surely God is high, supreme!”

This may raise an eyebrow or two over here in America but before we go crazy, let’s examine this verse a little closer and in context, which I can’t harp on enough for this or any other verse.  First of all, a point that Muslims often make is that this verse is a three step program not meant to be enacted all at once.  Basically what it means is that if a guy’s wife is acting crazy or he fears she may cheat, ect, he’s got to do three things.

The first is that he talks with her or “admonish”s her as it’s put here.  He is not allowed to verbally abuse her or insult her, that’s forbidden.  What it really means is that he sits her down and has a heart to heart, tells her that her behavior is inappropriate and asks her to get her act together.

The second step is to withdraw from her sexually and physically, sending her to sleep in another room to show his disapproval of whatever the problem is.

Now and only now, if all else fails are the guys actually allowed to “beat.”  That said, let’s define beat.  As one Muslim man put it “You beat her, but not on the face- never touch the face.  You beat her with something that does not leave a mark or injury.  The Prophet gave an example:  he got two pieces of cloth and put them together, and he said, “Like this.”

It’s thought that although this verse seems harsh we have to keep in mind that this law was made during a time when husbands use to beat their wives pretty severely at times.  One Muslim comments that “the Prophet, in contrast, said that no man should ever touch or harm his wife; and he never touched any one of his wives at all.  So the Qur’an specifies that a man may not harm his wife, he may not touch her face; in fact some of the scholars said that he would have to use a handkerchief.”

Still seems a little off?  Degrading?  Maybe, maybe not.  Personally, as an American woman I can think of several things men from around here have said, done, or insinuated that made me feel a lot more degraded than being slapped around with a handkerchief.  But regardless, let’s look at two more points.

The first is that Muslims claim that this is meant to be an anti-divorce measure.  Divorce, as we will cover in-a-minute is much easier in Muslim countries than it is here.  So for a guy to really go through all these things rather than dump his wife could be taken as a sign that the marriage does mean something to him on some level.

The second is that this isn’t totally one sided.  While women aren’t allowed the same freedom to handkerchief-swat their husbands, it could be said that they’ve got something even better.  If she is dealing with a crazy husband, rather than go through the three step plan at home, she is allowed to…“sit down with the rest of the community, if need be with a judge, and draw up a contract with the man, which says: You have done this or that- if you do it again, this will be the consequence.  In other words, she is getting the community behind her.”

Now I'll be the first to say however, that regardless of how you feel about these specifications, the danger is when they are misused or interpreted.  But most good Muslims would agree, if you see a guy slapping or harming his wife in any way, you are not witnessing an example of a good Muslim or human being.

Can a man marry more than one wife?


Yes, technically up to four.  But only under one condition that some say makes it impossible.  The man must treated all his wives exactly the same.

How hard is it to get a divorce? 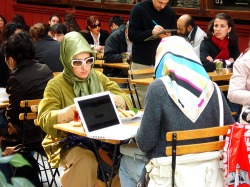 If a man wants a divorce he has to say to his wife “I wish to divorce you” three times in front of a witness, with a month in between each time.  The three months are to give the couple a chance to work things out and to make sure the woman isn’t pregnant.  (Unfortunately a lot of times this is abused and men skip the months and say all three “I wish to divorce you”s at once.  This is counter to Islam however).

A woman merely goes to a judge, explains the reasons she wants the divorce and gets one, though the judge may sometimes urge the couple to try and work things out.