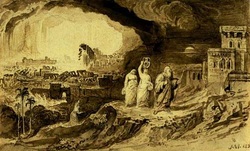 The Context:  Ah yes, Sodom and Gomorrah, the cities that have for years been linked with homosexuality and evidence of what becomes of those who participate in such lewd acts.  But was homosexuality actually the reason for God's firey wrath?  Since the story is a bit lengthy I'm going to give it it's own page which I now invite you to peruse by clicking on the link below.

A Few Things To Consider After Your Terrifying Read 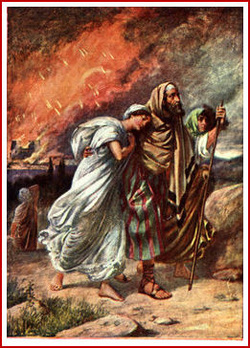 No matter what your interpretation, it can’t be argued that what was being proposed here was not only gang rape but far from a loving homosexual relationship. The main point was to get the angels to come out so that harm could be done to them, not so that the men of the town could entertain them with cocktails and a Liza Manelli CD.

- Lot offered the crowd his daughters instead, signifying that he knew the men of the town to be straight.

- The decision to destroy Sodom was actually made by God in Chapter 18, before anything about homosexuality was ever mentioned. Abraham intercedes on behalf of Sodom and God agrees not to destroy it if even only ten righteous people could be found. It’s unreasonable to believe that every man woman and child in the city turned out to be gay, therefore it probably wasn’t the sole cause of God’s wrath as many people suggest.

- Rape of other men was a common practice in ancient times as a sign of humiliation and degregation. Often the king of conquered armies was raped by the heterosexual conquerors, as a sign of defeat, no more due to any sort of lust or intemacy than would be involved in the rape of a woman. It’s likely this was just the sort of thing an angry mob would propose.

- In the original Hebrew, the men ask Lot to bring out the angels so that they can (literally translated)“yadha” them in the original Hebrew. Translations of this can include anything from “to know”, “to check out” to “to have sex with”. This translation could just as easily mean they wanted them brought out simply so they could do violence to them.

- Ezekial 16:48-50 specifies the reasons that Sodom was destroyed as being: pride, laziness, being inhospitable, neglecting the needs of the poor, greed, and idolatry. Nothing about homosexuality is ever mentioned.

- Sodom and Gammorah were very rich towns that at this time had closed off their hospitality to strangers, a custom so important in the time and culture that to refuse it could mean life or death to a traveler. Many Biblical scholars argue that the sin committed here was inhospitality of the highest order. It could be argued that it’s the same sin committed when a gay person is met with prejudice or even hate when they walk into a church. This village, which was on it’s very last leg with God, blew their one chance to appeal to him on the level that a resteraunt under scrutiny by the FDA would if they greeted it’s agents by attempting to beat them to death with baseball bats. The fact that homosexuality was involved seems to be a side note rather than the focus as many people try and make it.