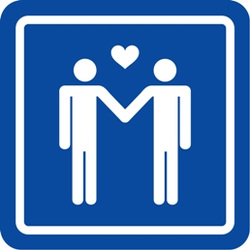 This one's been an interesting question for many years, one sparked by various hate groups or merely concerned groups of Christians who feel that the gay life style goes against their beliefs.  But does being a Christian automatically mean you must believe that homosexuality is a sin?

I say not necessarily.  Personally for me, the countless verses on love uttered by Christ Himself (who actually had nothing at all to say about homosexuality) always won out over the fiery ones where God seems to condemn it.  This eventually lead me to mount a pretty thorough look into the verses in the Bible where homosexuality is mentioned.  I invite you to take a look at both these passages as well as some info surrounding their context:

The Biblical Version of Marriage

Last but not least, I know there's a very popular argument about holding up the "Biblical View of Marriage."  Which is fantastic...as long as you're sure you know what that means.  Let's take a look:

As you have hopefully gathered if you read through the above, my point is that although there will always be those who interprut the above verses to mean that God doesn't like homosexuality, it certainly isn't the only interprutation.  To check out Christian homosexual groups, click on the following websites: