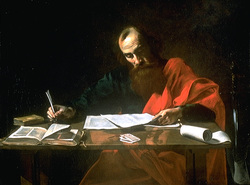 This one is what many people point to when attempting to prove that homosexuality isn’t natural, even for people who feel strongly that they were born that way and could never be any other way. It’s often used to discard scientific studies that prove otherwise and seems to influence those who just don’t feel as if they could even consider the idea that being gay could be a normality for some people. Let’s take a closer look.

Paul was writing here about a group of people who had abandoned their worship of God in exchange for idol worship, with which at the time was associated with all kinds of bizarre sexual rituals, some of them homosexual. Although this verse can seem pretty clear cut, it could be argued in context that Paul’s real problem was witnessing evidence of people worshiping the wrong God, not necessarily that they were having what (again) don’t appear to be loving long term homosexual relationship.

The first thing that I want to point out with the verse is that the fact that these people are said to have abandoned heterosexuality in itself suggests that they are not people who were who feel that they were born gay. These appear to be straight men and women who for whatever reason felt the need to engage in homosexual behavior, a bit like straight girls who kiss at a bar to turn on some pervey guy. The fact that Paul seems to concentrate solely on their sexual acts doesn’t seem to suggest that there was anything more to their relationships and therefore may not provide the best example for a homosexual couple.

The other thing I do want to call into consideration here is the literal translation of this verse. Though there seem to be a group who fail to understand that the Bible wasn’t originally written in King James English, we must keep in mind that this is indeed a translation of a Greek passage.  The words I want us to look closer at form the core of the verse: “physin” and “paraphysin” which have been translated to mean “natural” and “unnatural”.

The literal Greek translation here however means something more along the lines of “uncharacteristic” or “outside of ritual”. The word“paraphysin” is also used to apply to God in Romans 11:24 when He begins to accept Gentiles, which was uncharacteristic for Him up until this time, as He had always (pretty exclusively) been the God of the Israelites. Looked at from this perspective it seems that the problem here was that these were heterosexuals acting like homosexuals, an act not natural to them simply because that wasn’t what they were. Taken in this context this verse could actually suggest that it would be unnatural for a homosexual to act as a heterosexual as not being yourself seems to be the sin actually in question.