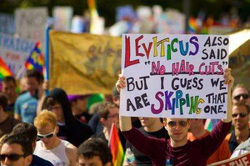 You shall not lie with a man as one lies with a women; this is an abomination.
Leviticus 18:22

If a man also lie with mankind as he lieth with a woman, both of them have committed an abomination; they should surely be put to death.
Leviticus 20:13

Favorites of Gay haters everywhere, these verses are among the most common often found scrawled on signs carried by hate groups. They come to the Israelites straight from Moses as a covenant between God and the Jews, which is what most people tend to ignore totally. There has been in the past century or so a new branch of Christianity called “literalism”, an invention of the 20th century onward which states that not only should these and other verses be taken out of cultural context but that in fact everything written in the Bible is both literal and meant to apply to every group of people everywhere throughout time. Bizarrely enough however, the following verses, taken from the exact same code tend to be conveniently ignored.While the two verses above have been enough to send picketers spilling into the streets, the following commands and laws seem to go unnoticed:

- It is a “toevah” (the same Hebrew word meaning abomination in the first verse above) to eat shrimp or crab legs according to Lev 11:9-12

- According to Deut. 22:13-21 a marriage can only exist between a man and a virgin.  If it turns out the wife isn't a virgin, she must be put to death.

- “Don’t cut the hair on the sides of your head or trim your beard.”- Lev 19:27.
*In accordance with the same law they are insisting be upheld, every single man at a gay protest rally should be sporting a knee length beard.

- Keep my Sabbaths and rever my Sanctuary” Lev 19:30
*Anyone at a gay protest rally on a Saturday (Jewish Sabbath) could technically be put to death under Exodus 35:2 for making or lifting signs, which could be considered work.

- “When a foreigner lives with you in your land, don’t take advantage of him. Treat the foreigner the same as a native. Love him like one of your own.” - Lev 20:33-34
*Kind of funny considering that many republicans who hate gays are also the ones that are the hardest on illegal immigrants. According to this law they should be their biggest advocates.

- “Each and every person who curses his father or mother must be put to death.”- Lev 20:9.
*How many kids you think Michelle Bachmann will have left after this one?

- Tired of your daughter? Exodus 21:7 makes it cool to sell her into slavery. 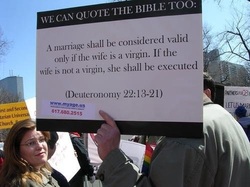 The point being, although yes there are clear references here that forbid homosexuality in ancient Jewish culture, homosexuals should no more be killed or hated today because of these verses than a guy that doesn’t wear a beard. These, like all Bible verses were written at a very specific time for a very specific group of people. We must be willing to examine the facts that Israel was a nation very much in need of growth at the time and semen used for purposes other than reproduction was considered such a no-no in general that the Old Testament tells of a man who was literally struck dead for ejaculating outside of a woman he was having sex with. Additionally homosexuality at the time was often associated with pagan practices and temple rituals of surrounding tribes. Many of the rules here, especially the odder ones such as foods to stay away from were made as a direct result of God attempting to separate the Israelites from these pagans which should be taken into consideration.

Regardless, those who are ready to apply these rules to modern society better be willing to apply all of them, even the ones dealing with adultery and sex before marriage, both of which are just as much a threat to the “ideal” of marriage that Christians claim to strive so boldly for. With divorce rates hovering around 50% in this country, turning to gay people as scapegoats for the destruction of an institution that’s supposed to be sacred seems not only hypocritical but a bit strange.