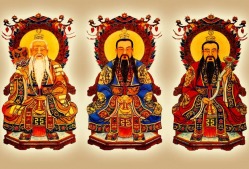 These are the highest of all the supreme beings of Daoist lore, the big guys so to speak.  As the story goes, in the beginning was the Dao.  The Dao produced Chi.  Chi produced yin and yang.  Yin and Yang produced the 3 pure ones.  And out of them came, well, everything else.  Allow me to introduce you:

-The first is known as the Jade Purity.

-The second is called the Supreme Pure One.  He is associated with yin and yang and is the keeper of the sacred book.  He’s also responsible for time and dividing it up.

-Last but not least is the most ancient of the ancients (the one with the white beard):  The Grand Pure One.  It was he who manifested himself into Lao Tzu and consequently can be considered the founder of Daoism 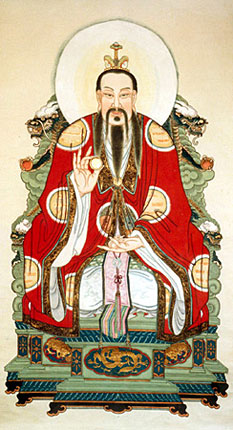 The Jade Emperor is the ruler of heaven, mankind, and hell but none the less still ranks below the Three Pure Ones.  Legend has it that he was originally a great king who through millions of years of cultivation eventually attained immortality and became the Jade Emperor.  His greater significance came to light when he emerged from a couple million years of meditation to find that a demon had had the same idea, and cultivated itself to great power via it’s own couple million years meditation run.  It had emerged quite powerful and was terrorizing heaven with an army of demons it had recruited.  However when The Jade Emperor stepped onto the scene and saw that the demon was too powerful to be defeated by any of the other immortals of heaven, he challenged and was able to defeat it because he had cultivated not only power but virtue as well.  After such a great display of virtue and benevolence the Jade Emperor was proclaimed ruler over the immortals and mortal alike.

In another story, the Jade Emperor was the one who got the idea one day to fashion humans out of mud.  Unfortunately for us though, he left us to dry in the sun on a day that it rained and some of us got misshapen, which explains where sickness and disease come from.

Every year the Chinese Celebrate The Jade Emperor’s birthday as well as honor him on Chinese New Year because it’s said to be the day that he makes his annual inspection of mortals and judges us accordingly.

Queen Mother of the WesT 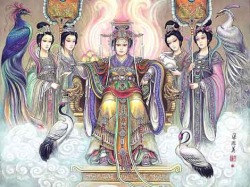 Although she probably actually predates Daoism, the Queen Mother of the West is regardless most widely associated with it and is a very important figure of Daoist Lore.  She is said to live on Mount Kunlun in Western China in a beautiful paradise-like palace, where she holds meetings both with gods and between gods and mortals.  Surrounded by a host of beautiful goddesses, the Queen Mother is known to be a patron of longevity, eternal bliss, and prosperity.
Another cool thing about her palace is that it hosts a special garden with even more special peaches that only bloom once every 3,000 years.  If you happen to be visiting when the bloom takes place however you are in luck because by eating one of these tasty fruits you too can achieve immortality.

Guan Yu was actually a well known military general during the late Eastern Han dynasty of China, who is traditionally depicted with a red face and long beard.  Though many tales concerning his life have probably been a wee bit exaggerated through folk stories, he is still seen as the epitome of righteousness and loyalty.  Although a warrior, he killed only when necessary and refused to surrender to an enemy army even though it ultimately cost him his life.
These days he is widely worshiped by Chinese Police men and businessmen.  Ironically he is also a favorite of gang members who he serves to remind that there is still a code of honor even in the underworld. 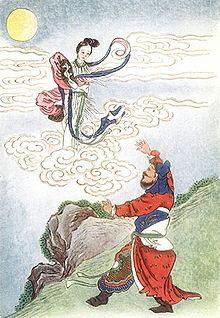 Chang'e and her husband Houyi where just a couple of normal, happy immortals living in heaven, until one day Houyi was called for by the Jade Emperor.  It seems that ten of his sons had transformed into suns and were destorying the earth with their heat.  Houyi decided to solve the problem with his legendary archery skills by shooting down nine of the ten sons and leaving the last one to be the sun we now know.
However this left the Jade Emperor a bit upset because, well 9 of his sons were dead.  So he banished Chang'e and Houyi to earth to live as mere mortals like the rest of us.
Houyi could see that his wife was very unhappy as a mortal so he took a trip to see the Queen Mother of the West in hopes that she could help.  It turned out she could and gave him a pill that when split in two and taken by Houyi and his wife would make them immortal again.
Houyi happily took the pill home in the box but warned Chang'e not to touch it while he was away.  Of course however she got curious and opened the box just as Houyi was returning home.  Nervous that she would be caught, she took the whole pill herself, not knowing that you were only supposed to take half.  Much to her dismay the overdose not only made her immortal but caused her to float, and float she did until finally she reached the moon.
She wasn't completely lonely however because as everyone knows there is a jade rabbit who lives on the moon and makes elixirs and medicines.  Also in her company was a woodman named Wu Gang, a woodman who had been banished to the moon for offending the gods.  He was told he could leave the moon if he chopped down a certain tree, but every time he did, the pesky tree would spring back up immediately, so he remains there to this day.

Version 2:
In the second version Chang'e started out as a young immortal who worked in the palace of the Jade Emperor who she angered one day by breaking a jar.  He banished her to earth to live among mortals where she met a young hunter named Houyi.  One day the ten suns appeared in the sky, and Houyi, an expert archer, shot nine of them down and became a hero and eventually a king who married Chang'e.
However over time Houyi decided he wanted to live forever and began to seek a magic elixir of immortality.  Apparently one day he found it and it was being prepared for him in the form of a pill.  However right before it was ready Chang'e discovered it and either accidentally or on purpose ate it herself.  Her husband became enraged and as he chased her, she leapt from a top tower in the palace but rather than falling ascended to the moon.  Legend has it that eventually Houyi ascended to the sun where he built a palace and to this day he and his wife are the representatives of the sun and moon, ying and yang.